Ruprecht, a 16th century mercenary, takes lodgings at an inn but is disturbed by a young woman in the next room. Renata tells how in her childhood she loved and was nurtured by a fiery angel called Madiel. Reaching the age of 16, she yearned for sexual as well as spiritual union but he then vanished for ever. In adulthood she thought she had found him again in the shape of Count Heinrich, but after a year of love he too vanished. Now she is tormented by demons. Ruprecht is drawn to Renata and, although she spurns his advances, he determines to help her. In Cologne, the pair attempt to conjure up the spirit of Heinrich with black magic learnt from occult books. Ruprecht seeks help from the magician Agrippa, who tells him the only true magic comes from the study of science. Heinrich appears in Cologne, and spurns Rentata for seducing him. Longing for vengeance, Renata sends Ruprecht to challenge him to a duel. But when she glimpses Heinrich she believes again that he is the fiery angel and tells Ruprecht not to harm him. In the ensuing duel Ruprecht lets himself be wounded and Renata, distraught, acknowledges her growing love. But when he recovers, she rejects him as an agent of the Devil and disappears. This quarrel has been witnessed by Faust and Mephistopheles, who invite Ruprecht to join them. Renata has fled to a nunnery to seek atonement. The novices become possessed by diabolic forces and an Inquisitor performs an exorcism. Renata pleads innocence but a frenzy mounts in the nuns. Ruprecht, Faust and Mephistopheles enter the nunnery unseen and watch the growing madness. Renata and the nuns attack the the Inquisitor and he condemns her to be burned at the stake. 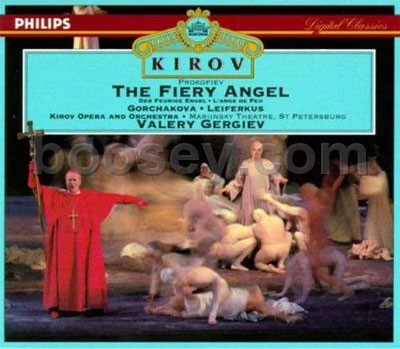