The Imaginary Town of Roulettenburg, 1865

A group of gamblers are staying in the German town of Roulettenburg. These include a retired Russian general, his step-daughter Pauline, and his young children’s tutor Alexei. The general is in debt to a French marquis, and is pursued by the manipulative social-climber Blanche. Both know that he hopes to inherit a fortune from his elderly aunt Babulenka. Alexei is gambling with Paulina’s money, acting as her agent but losing badly, and they are tied together by a complex love-hate relationship. She constantly tries to humiliate him and when she makes him insult a German baroness, the general dismisses him for his misbehaviour. Alexei learns from an Englishman that the general is in debt, that Pauline may also benefit from Babulenka’s will, and that the marquis may have intentions towards Pauline. Babulenka unexpectedly arrives. Far from ill, the old lady promptly heads for the gambling tables, spurning the general, and taking Alexei with her instead. To everyone’s horror, she loses most of her fortune and returns to Moscow, leaving the general with no hope of money. Blanche abandons the general for another Russian aristocrat and the marquis decides to call in his debts. Pauline now confides to Alexei that she has already been seduced and betrayed by the marquis, but still loves him. The marquis however feels nothing for her and has salved his conscience only by transferring to her part of the general’s debts. Alexei, despairing, runs to the casino, where he suddenly finds himself winning enormous riches. These he offers to Pauline with his love. But Pauline, though intensely drawn, sees in this situation only further humiliation. She hurls the money in his face and leaves him forever. 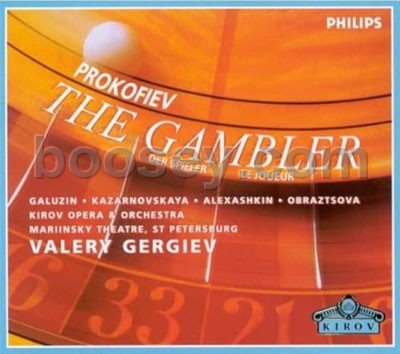