Because a composer’s music speaks louder than his words about that music, I tend to keep quiet about my own work—at least about its “emotional” content.  (I do, however, talk a lot about other people’s work).  But a paragraph or two on the Cello Concerto might prove useful.


When David Geringas came to visit in early 2000 I was pleased by his wish for a new piece.  Since I already had a Violin Concerto, and a Double Concerto for Violin & Cello, a Cello Concerto would round off a perfect program.  I got around to it only two years later, completing the bulk of it during the summer of 2002.


Although I don’t believe that non-vocal music can be proved to “mean” anything, even when given descriptive names like La Mer or Pictures at an Exhibition, it’s still fun to give programmatic subtitles to various sections.  Thus the eight movements of the Concerto are more or less literal descriptions:


2. There and Back. The 137 rapid measures are split down the middle from


whence they return to their beginning.


3. Three Queries, One Response. A rambling unison passage is followed by a


calm cello solo with piano ostinato; another rambling unison, then another calm


cello; a final rambling unison, then a final cello solo.


4. Competitive Chaos. A solo Violin vies with the solo Cello throughout this fast


movement which is labeled “Quick & Brutal”.


5. A Single Tone, A Dozen Implications. While the soloist sustains a single


expressionless “E”, the orchestra imposes, separately, a sequence of twelve


6. One Coin, Two Sides. Two versions of the same sonic play, the second being


7. Valse Rappelée. The title of course echoes Liszt’s Valse Oubliée, and is an


orchestration of one of my Dances for Cello from 1984.


8. Adrift. Against a weaving ostinato for harp & strings, the cello sings a long


long strain which gradually fades to nothing.


The scoring is modest: winds in pairs, 2 trumpets, two horns, (no trombones), no percussion except timpani, and strings.

"The concerto is a kaleidoscopic piece, with lush colors and big, arching tunes that dwell somewhere between Shostakovich's tragic mode and Copland's cheerfulness. It featured eight episodic movements bearing chirpy titles (A Single Tone, A Dozen Implications). It was strongest when it was simplest, as in the Three Queries, One Response, where orchestral unisons are answered by a tranquil cello. Especially beautiful was One Coin, Two Sides, where Geringas played a lovely ‘song’ with the first three cellists. There were didactic moments, like A Single Tone, A Dozen Implications. Then a waltz. Then a fade into oblivion. The concerto is loaded with passages of lovely music." (Paul Horsley, The Kansas City Star, 30.03.2003) 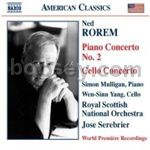