Interview with John Adams about "On the Transmigration of Souls"

The events of 9 / 11 affected people in many different ways. How did your personal reaction to 9 / 11 influence the creation of this work?
The request to compose this piece came in late January, which meant I had not much more than six months. Normally you begin planning an orchestral work of this scope more than a year in advance. Earlier in the year the New York Philharmonic had already decided on a program that would begin with Stravinksy’s "Symphony of Psalms" and follow it with the Ninth Symphony of Beethoven, both of them works for chorus and orchestra. However, on reflecting that these concerts would take place almost exactly a year to the day of the September 11 events, the Philharmonic felt that these concerts needed something that would directly respond to the emotional nature of that anniversary.

Did you feel any uncertainty about accepting such a commission?
I didn’t require any time at all to decide whether or not to do it. I knew immediately that I very much wanted to do this piece–in fact I needed to do it. Even though I wasn’t exactly sure what kind of a shape the music would take, I knew that the labor and the immersion that would be required of me would help answer questions and uncertainites with my own feelings about the event. I was probably no different from most Americans in not knowing how to cope with the enormous complexities suddenly thrust upon us. Being given the opportunity to make a work of art that would speak directly to people’s emotions allowed me not only to come to grips personally with all that had happened, but also gave me a chance to give something to others.

How did your visit to the Ground Zero site affect you? How soon after 9 / 11 did you visit?
I visited the site in March, about six months after the cleanup began. By then the area resembled just a huge construction project. It was only when one looked closely and noticed the many little shrines and spontaneous memorials and handwritten messages still in evidence did the lingering mystery and sombreness of the area begin to make itself felt. I had the good fortune to be taken around the area by several policemen who themselves had been right in the midst of the chaos and danger when the towers fell. Even after six months the intensity in their voices while describing the events was palpable.

How would you characterize the musical style of On The Transmigration Of Souls? Are there specific techniques you employ?
My desire in writing this piece is to achieve in musical terms the same sort of feeling one gets upon entering one of those old, majestic cathedrals in France or Italy. When you walk into the Chartres Cathedral, for example, you experience an immediate sense of something otherworldly. You feel you are in the presence of many souls, generations upon generations of them, and you sense their collected energy as if they were all congregated or clustered in that one spot. And even though you might be with a group of people, or the cathedreal itself filled with other churchgoers or tourists, you feel very much alone with your thoughts and you find them focussed in a most extraordinary and spiritual way.

I want to avoid words like "requiem" or "memorial" when describing this piece because they too easily suggest conventions that this piece doesn’t share. If pressed, I’d probably call the piece a "memory space". It’s a place where you can go and be alone with your thoughts and emotions. The link to a particular historical event–in this case to 9/11–is there if you want to contemplate it. But I hope that the piece will summon human experience that goes beyond this particular event. "Transmigration" means "the movement from one place to another" or "the transition from one state of being to another." It could apply to populations of people, to migrations of species, to changes of chemical compositon, or to the passage of cells through a membrane. But in this case I mean it to imply the movement of the soul from one state to another. And I don’t just mean the transition from living to dead, but also the change that takes place within the souls of those that stay behind, of those who suffer pain and loss and then themselves come away from that experience transformed.

How difficult was it to incorporate existing text and audio into an original work, especially considering the profoundly intense subject matter?
Well, if you are an experienced composer, you should not have to shy away from considering "the profoundly intense". I have certainly confronted deep emotions in my music before, certainly in works like "Harmonium", which has poetry by John Donne and Emily Dickinson, "The Wound-Dresser" with its Whitman texts about the suffering and death of young men and boys during war time, and in "The Death of Klinghoffer", my opera about terrorism and the assassination of an elderly American Jew.

Finding the right text to set is half the challenge to creating such a piece. In the case of "Souls", I realized immediately that this event–"9/11"–was already so well documented, the drama so overdescribed and the images so overexposed that I didn’t really need to worry about an "exposition" of my material. Every listener hearing this piece will already know the story. So, in a way, that kind of "numbing familiarity" gave me a certain freedom to work with the materials.

I had no desire to create a musical "narrative" or description. Nothing could be more distasteful and banal. However, something I had seen on an amateur video taken minutes after the first plane had hit the first tower stuck in my mind: it was an image of millions and millions of pieces of paper floating out of the windows of the burning skyscraper and creating a virtual blizzard of white paper slowly drifting down to earth. The thought of so many lives lost in an instant–thousands–and also the thought of all these documents and memos and letters, faxes, spreadsheets and God knows what, all human record of one kind or another–all of this suggested a kind of density of texture that I wanted to capture in the music, but in an almost freeze-frame slow motion.

So I eventually settled on a surprisingly small amount of text. And this text falls into three categories. One is the simple reading of names, like a litany. I found friends and family members with different vocal timbres and asked each to read from the long list of victims. Then I made a sort of mantra-like composition out of the tape-recorded reading of these names, starting with the voice of a nine year-old boy and ending with that of two middle aged women, both mothers themselves. I mixed this with taped sounds of the city–traffic, people walking, distant voices of laughter or shouting, trucks, cars, sirens, steel doors shutting, brakes squealing–all the familiar sounds of the big city which are so common that we usually never notice them.

While a recording of the reading of names and the city noises quietly surrounds the audience, the onstage chorus sings texts that I took from missing-persons signs that had been posted by the families of the victims in the area around Ground Zero. These signs, photos of which were taken by Barbara Hawes, the New York Philharmonic’s archivist, had tremendous poignancy. Most had been hastily written and xeroxed, usually with a snapshot photo along with a physical description and often a heart-wrenching little message at the end, something like "Please come home, Louie. We miss you and we love you." What I discovered about the language of these messages was that it was invariably of the most simple and direct kind. No one stunned by the shock of a sudden loss like this has time nor inclination to speak or write with eloquent or flowerly language. Rather one speaks in the plainest words imaginable. When we say "Words fail" in situations like this, we mean it. So I realized that one of the great challenges of composing this piece would be finding a way to set the humblest of expressions like "He was the apple of my father’s eye", or "She looks so full of life in that picture."

Do the adult and children's choruses play differentiated roles in this work? How would you characterize their roles?
It’s common to give the children’s choir a certain "ethereal" or "angelic" role in a big concert piece. Mahler does that in his Eighth Symphony, and Benjamin Britten takes advantage of their innate "innocence" in his "War Requiem". I didn’t do quite the same thing. I wanted the children’s choir not just for these qualities but also because theirs is acoustically and timbrally a very very different sound from the mature voices of an adult chorus. So I used them a lot and I didn’t isolate them or give them the usual "innocent" role. In fact they are right there in the thick of things, singing along with the adults and the orchestra. I first used children’s choir in my Nativity oratorio, "El Niño", and they appear there only at the very end, singing a folk-like song about the palm tree in the desert, an archetype of the eternal feminine. It was such a powerful effect to play the children’s sound off that of the adults that I determined to take it much further in "Souls".

Your past works have shown that art can be a true agent in healing both the individual and the collective. Do you see this work as a healing force?
I am always nervous with the term "healing" as it applies to a work of art. I am reminded that we Americans can find a lot of things "healing". These days a criminal sentenced to death is executed and then we speak of "healing". It’s perplexing. So it’s not my intention to attempt "healing" in this piece. The event will always be there in memory, and the lives of those who suffered will forever remain burdened by the violence and the pain. Time might make the emotions and the grief gradually less acute, but nothing, least of all a work of art, is going to heal a wound of this sort. Instead, the best I can hope for is to create something that has both serenity and the kind of "gravitas" that those old cathedrals possess.

Modern people have learned all too well how to keep our emotions in check, and we know how to mask them with humor or irony. Music has a singular capacity to unlock those controls and bring us face to face with our raw, uncensored and unattenuated feelings. That is why during times when we are grieving or in need of being in touch with the core of our beings we seek out those pieces which speak to us with that sense of gravitas and serenity. 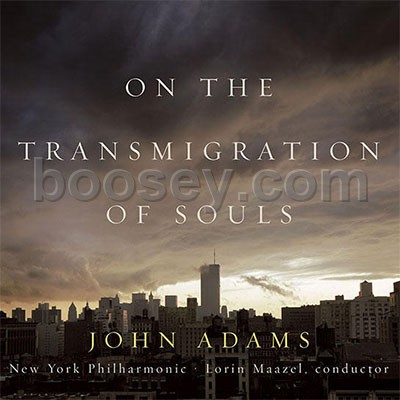