"The insistent tone clusters of the piano in Höller’s first movement, Improvisation on a motif by Johannes Brahms, sound similar to the portentously rigid rhythms in Bernd Alois Zimmermann’s Roi Ubu music. The Brahms motif, with its lyricism of nature, is forgotten in any case after the wide-ranging play of the solo piano, though the characteristic series of notes of the quotation serves as a tonal resource. The third movement, Improvisation sur le nom de Pierre Boulez, was written fifteen years ago as a tribute to the sixtieth birthday of the great French... Now the composition, with its angular sound and accentuated rhythms, rounds off the Gegenklänge (ie, ‘counter-sounds’) of Brahms and Boulez in a consistent way.
With motivic correspondences in the previous Intermezzo, Höller prepares the listener for the serially organized music with its very transparent sound. The striking bongo rhythm, which shifts the stress to the weak beats of the bar, has a dry, classicist effect in the finely tuned music, while the woodwinds continually contribute emphatic, expressive phrases. Pierre Boulez is not only paid respect to in the pitches and the rhythmical structure, both of which derive from the letters of Boulez’s name, but, above all, in the well-balanced treatment of the parts and the formation of the ensemble, in the way of Boulez’s own composition Marteau sans maître."
(Achim Heidenreich, FAZ, 17 Apr 2000) 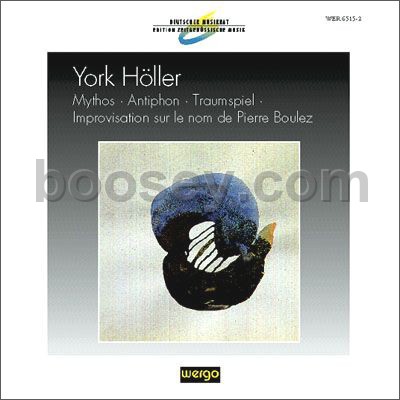