The Korean word Muak may be translated quite simply as »Dance Music«. Isang Yun’s »Dance Fantasy« for full orchestra was composed in 1978 for an anniversary celebration of the Lower Rhine Symphony Orchestra. The composer was guided by a scenic idea while composing this music; he had in mind a traditional Sino-Korean court dance, the »Nightingale Dance«, which was performed in honour of the king and for his amusement. Yun translated the impression of this court dance conveying the alternation between rest and motion in stylized elegance into his own musical language. As a contrast, the composer imagined European observers dancing their own dance around the East Asian dancers. The »European party« observes the »Asian party«, and, the tremendous temporal and cultural distance notwithstanding, mutual influence does indeed occur.

Yun realized this scenic idea very vividly in music. The encounter of the two groups occurs in three large formal parts. The fully developed sound of the European symphony orchestra is juxtaposed to the »pure« or »naive« Korean sound world of the woodwinds, especially the oboes. The European dance character is marked by reminiscences of familiar ballet music of the twentieth century (Stravinsky). Yun evokes the East Asian sound world by recreating the instrumental quality of the mouth organ in the woodwind part, which usually is accompanied by muted strings.

In the first section the rhythmically vital »European dance« abruptly breaks off three times in order to direct the eye and the ear to the East Asian dance ceremony, with the stopping of (subjective) time being suggested in each case. In this first section the two sound worlds stand in glaringly direct contrast, and the elemental Western interpretive dance comes to a virtually orgiastic conclusion. The second and third sections begin with oboe solo parts representing the song of the nightingale. In each case, however, a mediating link between these passages and the ensuing European character dances is formed, by a trumpet solo in the second section and by a solo of the trombones in the third section. Characteristic differences in the three phases of development are shown insofar as the »Nightingale Dance« most richly and freely unfolds to the song of the solo oboe in the third section, while the »European« orchestra responds in an increasingly nuanced and refined manner.

Up until the Flute Concerto (1977) Isang Yun utilized rhythm as a musical structural element only rather sparingly. In Muak, however, Yun for the first time also used motoric rhythms as an organizational principle. Muak was the first composition in which he lent expression to two different musical worlds as fundamental opposites. The piece demonstrates that it is possible for these two worlds not only to coexist but also to engage in mutual interchange. As a musical bridge between East and West, Muak points ahead to a real utopia far beyond the everyday political horizon.
Walter-Wolfgang Sparrer (1984) 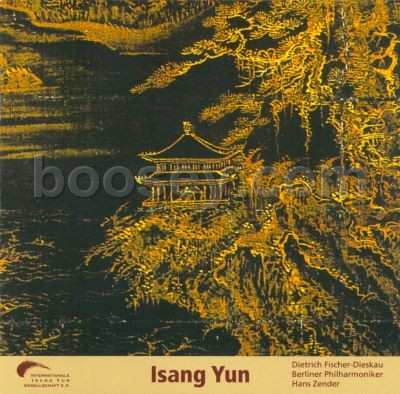