In the spring of 1988, shortly after the first series of Nixon in China performances in the US and Europe, I began thinking about a new work for orchestra. Working in the almost too beautiful confines of the American Academy in Rome, I found that ideas were slow arrive. When they did make an appearance I was surprised to see that they were in much the same vein as the Nixon music. Apparently I had more to say in that particular style, although this time it would be purely instrumental music, and the sound would be largely dictated by the Nixon orchestra, a kind of mutated big band, heavy on brass, winds, synthesizer and saxophones. To this ensemble I added for Fearful Symmetries a keyboard sampler playing sampled percussion sounds, two horns and a bassoon. Otherwise the ensemble is identical to that called for in the opera.

The music is, as its title suggests, almost maddeningly symmetrical. Four- and eight-bar phrases line up end to end, each articulated by blazingly obvious harmonic changes and an insistent chugging pulse. The familial resemblance to the opening minutes of The Chairman Dances is unmistakable, but in Fearful Symmetries the gestures are more emphatic and the music is more closely allied to pop and Minimalist rock. It’s clearly an example of what I call my "travelling music," music that gives the impression of continuous movement over a shifting landscape. In this piece, however, a cityscape is doubtless the more appropriate analogy as the sound has a distinctly urban feel.

It is for sure a seriously aerobic piece, a Pantagruel boogie with a thrusting, grinding beat that governs at least two-thirds of its length. Perhaps partly for this reason, it’s become my most choreographed work, with over a dozen different versions, including those by the Royal Ballet and the New York City Ballet, in current use. What appeals to me most about the piece is the timbre: It mixes the weight and bravura of a big band with the glittering, synthetic sheen of techno pop (samples and synthesizer) and the facility and finesse of a symphony orchestra.

The part for synthesizer is very prominent. It was originally written for the big double-manual Yamaha Electone, a hybrid between a synth and an organ complete with chromatic pedals. The revised version, however, calls only for a sampler with two keyboards (in addition to the percussion sampler, played by another performer). The saxophone quartet, so critical to the Nixon in China sound, is treated here usually as a single homophonic unit.

"John Adams's Fearful Symmetries is such a perfect score for dance that it virtually choreographs itself. With its pulsating rhythms and minimalist drive, it sounds like an orchestrated traffic jam..." -- The Times (London) 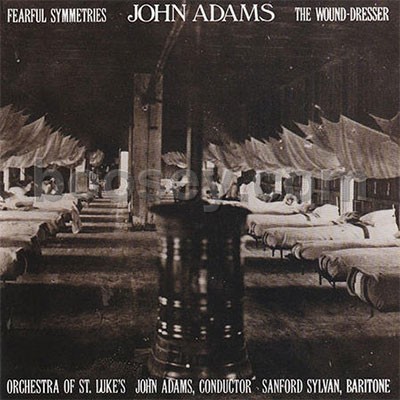