The title Fanal (from the Greek, ‘phanos’, a beacon) refers to the image of a a ‘fiery beacon’which forms the idea behind the work. The musical language - particularly at the work’s opening - resembles a sudden bursting into flames; other moments suggest the fitful flickering, the even licking, the almost motionless glow of the flames, while the close depicts the gradual dying of the fire.
The solo trumpet performs in the midst of this activity at different perspective levels: by no means always in the foreground, it can also be heard in the middle and occasionally even in the background of the ‘soundscape’. The ‘sound-symbol’, E flat, sometimes called the ‘heroic’ note since Beethoven’s Symphony No.3, also plays an important role.
A word, finally, about the encoded symbolism: within the 32-note ‘sound-shape’ on which the work’s musical structure and form are based, notes 20 to 24 are arranged so that their numerical position within the chromatic scale gives the following combination of numbers: 14.7.(17)89. The work’s composition coincided with and was influenced by the bicentenary of the French Revolution.
(English translation: Emma Roach)

"The image of a flame, leaping high or slowly dying, lies behin the work, and John Wallace’s account was a brilliant pyrotechnical display. The music of Höller – and this work in particular – deserves to be heard much more often." (Barry Millington, The Times, 14 May 1997) 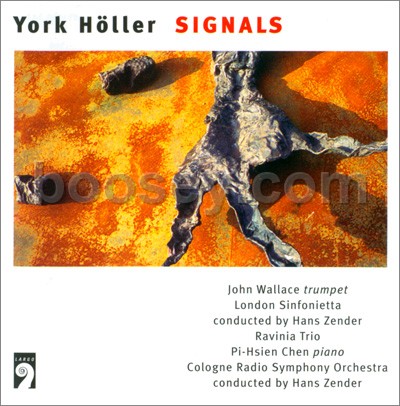