Finzi planned several volumes of songs in addition to those published in his lifetime, including at least two collections of settings of Hardy’s poetry. I Said to Love was given its first performance at Finzi’s memorial concert in 1957, prompting Vaughan Williams to particularly praise the first and last songs, I need to go and I said to Love, which "hit the nail in my head right away". Three songs in the collection date from Finzi’s final year: At Middle-Field Gate shows the composer exploring an adventurous harmonic pallette with whole tone configurations, For Life I had never cared greatly has a gentle tunefulness which disguises the skill required to achieve such natural intimacy, and I said to Love provided the composer with a violent, vigorous contrast to his work at scoring In terra pax. 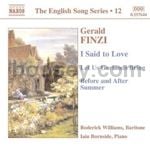