Eonta (beings) is so entitled as a homage to the ancient Greek philosopher and poet Parmenides. The original printed form of the title word is Cypriot orthography of Creto-mycaenean origin, lost for over 24 centuries and only recently deciphered. Eonta, written in Berlin during 1963-64, was first performed at the Domaine Musical concerts in Paris, conducted by Pierre Boulez, in December 1964. It makes use of stochastic music (based on the theory of probabilities) and symbolic music (based on logistics). Some of the instrumental parts, notably the piano solo at the opening, were calculated on an IBM 7090 computer at the Place Vendôme, Paris.
Iannis Xenakis 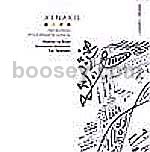