The name of my piece speaks for itself. I came across it in "The Soprano Project De Iaculatione Tomatonis (in cantatricem)," a nonsense treatise by the wonderful French poet Georges Perec, the son of Polish-Jewish immigrants to Paris. The work was first published in England in 1974. With Perec and other members of OuLiPo (derived from ouvroir de littérature potentielle), a circle of dadaist poets around Perec, Calvino and Quenau, I associate the love of wordplay, anagrams, palindromes and acrostic invention which I have used before as the underlying text of earlier compositions.

Composing music based on poetry which conveys specific content and emotion is not something I am particularly fond of doing. Music and literature are forms of expression with clearly different "idioms" which not infrequently get in each other’s way when combined. The way I see (and hear) it, the advantage of combinatorial techniques in poetry is not only the lack of concrete meaning and "messages," but also—and more importantly—how closely related this approach is to the process of composing music. A "boule de neige" for example (a text which continuously grows like a "snowballing" effect from a small "proto-semantic" cell which like a chameleon varies in meaning as it grows) is of itself already a musical process in that its musical material fans out over time. Where I continue to see myself connected with these "word artists" is the self-referential aspect of their word games, as well as the humour and irony of what they create. However, with the exception of "boule de neige" (No. IV) by Harry Mathews, I use no further texts by the OuLiPo group. I developed four of the eight texts myself while composing; No. II took form by borrowing an idea of Gertrude Stein, No. V is an Italian adaptation of a poem from the "Phantasus" cycle (1898/99) by the Berlin poet Arno Holz (who anticipated several avant-garde elements of the twentieth century), and No. VI is based on a Chinese text dating from the Tang dynasty (seventh to tenth centuries), which was used less on a semantic level than it was for its sonic qualities.

"Cantatrix sopranica" is a self-referential work on several different planes. On the one hand its theme centres on singing (especially in Nos. I, II, V and VIII), which is to say the specific states of mind singers experience, their tricks and nervous tics, from warming up their voice right down to how they present themselves on the concert podium (and backstage). My piece is about musical phenomena or processes which are reflected on in the language and vice versa (III and VII). A hybrid onomatopoeic inspiration such as "Cis n’est pas Ces" had fatal consequences on the musical material, which performing musicians will confirm. Playful treatment of musical languages from earlier periods, vocal "techniques" which somehow become an end in themselves, and idiomatic clichés found not only in music of European provenance (V and VI) all play a role in my piece. Vocal and instrumental performance interact, role-playing is involved and even role reversals among singers and instrumentalists. I also attempt to achieve the greatest possible symbiosis between language and tonal processes and hopefully not unfairly have the intention of not only entertaining my listeners but also amusing them as well. This piece is not without its musical Till Eulenspiegel mischief, which, as is generally known, can easily take on a menacing air.

Along with Ligeti, Chin shares a pleasure in parodying and imitating and a preference for the imaginary and the ambiguous, a feature that also plays a role in Cantatrix Sopranica. A few words on the title: In the 1970s, the writer Georges Perec had rotten tomatoes (of the genus “Cantatrix Sopranica L.”) thrown at 107 soprano singers in the name of science. Their “screaming reactions” were to allow for conclusions to be made about the “tomatotopical organisation pattern” of sopranoes. Of course the event did not take place in reality but was a parody of a scientific study which Perec humorously described and from which Unsuk Chin borrowed the title for her latest work.

Chin describes her Cantatrix Sopranica as a kind of study: it is supposed to be an “exploration of the act of singing”, or “singing about singing”. Thus the singers develop a variety of vocal styles, from the imitation of warm-up exercises in the first piece over a parody of Italian Belcanto (Con tutti i Fantasmi) to forms of expression and gestures that are typical for both contemporary music and ethnic vocal music such as Chinese folk songs. It seems only logical that Chin assigns different “texts”, or sometimes only phonetic material without any semantic meaning, to the individual vocal styles. Thus the first, seventh and last movements use only individual sounds, syllables or fragments of words, added to the composition as musical elements. In other places, Chin uses existing texts, such as in Boule de Neige (snowball). It is based on a poem by the American poet Harry Mathews, who, like Perec, belonged to the writers’ group, Oulipo and subjected his poems to compulsory formal rules, in this case the visual form of a pyramid. In Yue Guang – Clair de Lune, a parody of a Chinese folk song, Chin draws on a text from the time of the Tang dynasty. While the first stanza is about the sense of desire felt in a moonlit scene, the second consists only of a play on words that is derived from the first one; it is a kind of pseudo-Chinese. In other movements, the texts describe the music that is heard at the same time, as in Cis n’est pas Ces, a play on enharmonic relations. In these moments, Cantatrix Sopranica develops into a self-referential “singing experiment” in which the voices are sometimes made to sound almost “instrumental”. This happens in the last piece, where Chin mixes up the roles in an imaginative way, making the singers treat their voices as instruments, while the musicians, on the other hand, begin to “sing” with their instruments.

“Cantatrix Sopranica will surely add lustre to Chin’s reputation as one of the most imaginative purveyors of modernism that is at once colourful, witty and of real substance… From its opening number, with its skittishly inventive, happily euphonious gloss on tuning and vocal ululation, to the last, which treats the voices as both instruments and theatrical characters, the work is sheer delight.”
The Independent

“The first four movements begin with the innocent intervals of fifth and third which very soon become undermined. Glissandi smudge them; buzzing avalanches (“Boule de Neige”) drown them. …everything is silky soft and misty light. Moreover, it is comical… Never did a detailed new music work of new music appear so brief. The work was greeted with enthusiastic applause.”
Rheinische Post 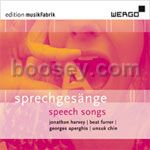