Movements from this work may be performed individually

“…a multitude of deliberate but graceful, often hymn-like cantilenas are spun out and developed. Skilfully crafted, never jarring or disconcerting, and full of that quality one could quite easily refer to as ‘typically Finnish’.”
De Morgen


“It is comforting to think that the moods of exalted age can be so blissful. Rautavaara can handle serious issues in life with equanimity… A Tale of Fate with which the work ends shows that the fate theme already heard in the first movement is a reminder of Yusupov’s aria in Rautavaara’s opera Rasputin. The bells of fate ring out and the movement also takes in a violent outburst that could be thought to allude to the aortic rupture which Rautavaara suffered while he was working on this very movement.”
Helsingin Samomat 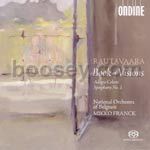