Shostakovich’s most famous and popular symphony is one of the orchestral classics of the 20th century and a central work in the repertory of most orchestras the world over.


Written in 1937 at the height of Stalin’s Great Purges, and a time when the composer himself was subject to tremendous personal and political pressure from the authorities (busy bringing terror to every corner of Soviet society), this is a tragic symphony in several senses. First, it gives monumental utterance to the composer’s appalling predicament and the misery he saw all around him. But it is also a tragic in and of itself, music that communicates with searing power and grandeur even to those who know nothing of the circumstances of its composition. From the searching and despairing echoes of Bach in the first movement, through the neo-Mahlerian scherzo and the desolation of the slow movement, to the famously violent and barbaric finale, this is a symphony that has drawn many first-time listeners into the world of Shostakovich and beyond him into the dramas and beauty of the whole of classical music.


Into the quieter central section of the last movement, the composer weaves in a quotation from one his songs, the first of his Four Romances on Poems by Pushkin op.46. The words speak of the artist’s hope and faith that his inner self will recover from the catastophic ‘delusions’ that have ensnared it. Such half-hidden symbolism is typical of Shostakovich and emblematic of the way his music can appeal to audiences of many different kinds. 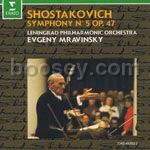