Finzi’s music for Shakespeare’s Love’s Labours Lost, one of his least-known works that deserves wider performance, was created soon after the end of World War II and represented something of a compositional watershed. Writing short items to the tight three-week deadline of a broadcast proved to be a liberating experience for a composer so used to revisiting and refining works over decades: the theatrical fluency Finzi discovered was an important ingredient in the confident burst of works of his last years. The suite, which was assembled later by the composer and includes additional new material, comprises a sequence of characterful miniatures, clothed in surprisingly variegated orchestral hues. Unusually for Finzi the orchestral spotlight is frequently cast onto solo instruments, including the trumpet in the opening fanfare, airborne woodwind in Moth, and the horns in the ‘hunt’ scherzo. With its lightness and wit, this suite is perfect for chamber orchestras investigating new fare for summer festivals. 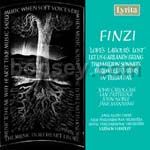