True confession: When I got off the phone after my first conversation concerning the schedule for the premiere of Eating Greens, the initial excitement quickly gave way to a wave of paranoid self-deprication; “Why didn’t I write a piece like ‘X’ or a piece like ‘Y’,” where X and Y represent established European avant-garde masterpieces --monoliths of the twentieth century -- that I studied in school. This self-esteem crisis passed when it occured to me that it was not necessarily a bad thing that I couldn’t think of a genre of which my piece was simply another example. Neither is it a bad thing that my work reflects an individual sensibility of which my teachers and musical ancestors might not entirely approve. Of course, this is all psychological projection; I really like Eating Greens but I’m not sure whether or not I should like it. At any rate, for better or worse, in Eating Greens, I somehow managed to be myself, despite the grand, somewhat intimidating auspices of the occasion -- a major orchestra premiere.

The title for Eating Greens was taken from a painting I bought in New Orleans at an African art store in the French quarter (it makes me sound rather cosmopolitan, doesn't it?). This was my first purchase of original art. Leafing through a stack of canvases by Margaret Leonard, Eating Greens immediately caught my attention. I really liked it but remember asking myself if I should like it (sound familiar?). The scene was a three-generational African-American family seated at the table for a meal. There is a big, iron stove and some shelving in the room, but not much else except wall paper: giant-strawberry wallpaper . . . strawberries as big as chairs, connected to vines that threaten to take root in my living room. Each plate at the table has a pile of greens and a piece of what I take to be cornbread. The settings are thoroughly furnished with silverware, yet everyone is eating with their fingers. The colors are shamelessly bright, Crayola colors. The perspective is wildly askew in different ways, in different parts of the painting: Kandinsky without the angst. My description sounds like a hodge-podge, yet somehow a single, distinctive personality emerges which touchingly considers domestic themes: religion, food and art.

A few months later, I went to the Matisse exhibit at the Museum of Modern Art in New York. I was familiar with his work through prints and admired the marriage of clear, formal principles and playful spirit, but the originals were a revelation. Up close, you could see the pencil marks intended to guide his cutting in the big cut-out works; he continually missed the lines. I imagined him, a grown man, sitting in his studio with a huge pole pasting construction paper on the wall. In spite of the cultural gulf between Henri Matisse and Margaret Leonard, I see a spiritual similarity between them. I would describe their work as deeply playful.

Speaking of ‘deeply playful,’ Thelonius Monk has been an inspiration to me in recent years. I am tickled when I hear him stumble through some scale that in someone else’s hands would be a cleanly executed, rhetorical gesture. In Monk’s hands, it is the stumbling that is important, not the scale. There is a

touching but complex irony hearing a sentimental legato ballad strained through Monk’s quirky, all-thumbs style. The ballad takes on a compelling reality, rather than a practiced, artistic, metaphorical form of abstract expression.

If I were having a party to honor the people who, I would hope, would see something of themselves in Eating Greens, I would invite -- in addition to Margaret Leonard, Henri Matisse and Thelonius Monk -- Charles Ives, Elliot Carter, Lou Harrison, Ruth Crawford Seeger, Harry Partch, Conlon Nancarrow, and others who are part of a diverse group of musical personalities that make up what I think of as a tradition of American ‘crackpot inventors.’ Their music swaggers with a spirit of rugged individualism and shows a healthy irreverance for the European masterpiece syndrome which, as recently as a generation ago, haunted American concert music composers.

I hope the preceding provides a context for the sensibilty of Eating Greens. In case there is no reception and you don’t have a chance to ask me specific questions about the piece, I’ll try to anticipate what some of those questions might be:

“What is with all the titles?”

I should first declare that titles, for me, are not descriptions or analyses of the piece but, rather, part of the piece. So, the ring of the words, the references imbedded within the words, even the layout of the words on the page is intended to be part of the experience of the piece. They suggest a mind-set, an attitude for listening. While there are inconsequential, personal anecdotes that laid the groundwork for these titles to occur to me, there is no secret story encoded in the titles and narrated in the music. The piece is not programmatic. As far as I’m concerned, music occurs when the acoustic signal I invented is processed in your mind/body.

This movement is a raucous, Dionysian romp. Its attitude reminds me a little of some Beethoven scherzo movements that play too exuberantly. Their momentum launches them into one too many repetitions of the theme. There is a sudden self-awareness and the theme is cut short, yanked off stage by a vaudevillian hook.

In Waffling (sic), when you consider the zany chain of events that brings us from the opening fanfare-upbeat and the cartoon-like arrangement of “Here We Go a Wassailing,” to the solo bass note three minutes later, I would claim that the pizza delivery, by the time you get there, is a plausible answer to the question, “what next?” The piece gets so derailed and befuddled that it requires a willful breach of concert protocol to get back on track. Enter the pizza; it was the best way I could get the bass player to stop brooding and come back to the party.

“Is there something odd about the tuning in Part II: Loose Threads?”

Eating Greens was commissioned by the Chicago Symphony Orchestra. The duration is approximately 18 minutes. 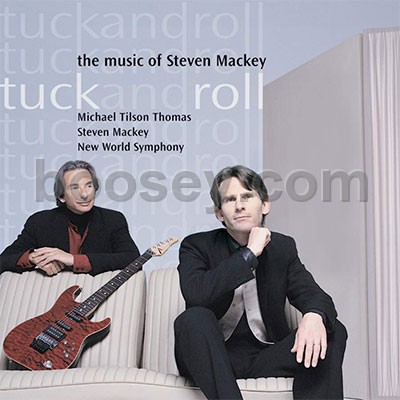