The proposal to write a violin concerto came from the violinist Jorja Fleezanis, a close friend and enthusiastic champion of new music. Composers who are not string players are seriously challenged when it comes to writing a concerto, and close collaborations are the rule, as it was in this case. For those who have not played a violin or a cello, the physical relation of the turned-over left wrist and grasping fingers defies logic. Intervals that ought to be simple are awkward, while gestures that seem humanly impossible turn out to be rudimentary.

A concerto without a strong melodic statement is hard to imagine. I knew that if I were to compose a violin concerto I would have to solve the issue of melody. I could not possibly have produced such a thing in the 1980’s because my compositional language was principally one of massed sonorities riding on great rippling waves of energy. Harmony and rhythm were the driving forces in my music of that decade; melody was almost non-existent. The “News” aria in Nixon in China, for example, is less melody than it is declamation riding over what feels like the chords of a giant ukelele.

But in the early 1990’s, during the composition of The Death of Klinghoffer, I began to think more about melody. This was perhaps a result of being partially liberated by a new chromatic richness that was creeping into my sound, but it was more likely due to the need to find a melodic means to set Alice Goodman’s psychologically complex libretto.

As if to compensate for years of neglecting the “singing line,” the Violin Concerto (1993) emerged as an almost implacably melodic piece—a example of “hypermelody.” The violin spins one long phrase after another wihout stop for nearly the full thirty-five minutes of the piece. I adopted the classic form of the concerto as a kind of Platonic model, even to the point of placing a brief cadenza for the soloist at the traditional locus near the end of the first movement. The concerto opens with a long extended rhapsody for the violin, a free, fantastical “endless melody” over the regularly pulsing staircase of upwardly rising figures in the orchestra. The second movement takes a received form, the chaconne, and gently stretches, compresses, and transfigures its contours and modalities while the violin floats like a disembodied spirit around and about the orchestral tissue. The chaconne’s title, “Body through which the dream flows,” is a phrase from a poem by Robert Haas, words that suggested to me the duality of flesh and spirit that permeates the movement. It is as if the violin is the “dream” that flows through the slow, regular heartbeat of the the orchestral “body.

The “Toccare” utilizes the surging, motoric power of Shaker Loops to create a virtuoso vehicle for the solo violin. After Jorja Fleezanis’s memorable premiere, many violinists have taken on the piece, and each has played it with his or her unique flair and understanding. Among them are Gidon Kremer (who made the first recording with the London Symphony), Vadim Repin, Robert McDuffie and, perhaps most astonishingly of all, Leila Josefowicz, who made the piece a personal calling card for years.

The Violin Concerto is dedicated to the memory of David Huntley, longtime enthusiast and great champion of my and much other contemporary music.

Financial Times
“Twenty-five years on from its premiere John Adams’s Violin Concerto has proved its staying power...It is a seductive and ever fascinating score.”

The Strad
“It’s a thoroughly appealing piece, in which Adams’s trademark rhythmic drive and sense of fun build to an infectious, percussive power."

Stereophile
“Twenty-five years after the premiere of John Adams' Violin Concerto, the music remains as vital,
exhilarating, and strangely moving as the day it was birthed. An extremely demanding work, its three
contrasting movements present a triathlon challenge of sorts to anyone who dares try to play them.
Chromaticism reigns in this wild music, which demands that the violinist play more notes per minute than seems fair.”

“As viscerally thrilling as it gets, it builds and builds as it whirls round and round and becomes
exceedingly more complex. The huge ending is astounding, and designed to bring cheering audience
members to their feet in classic violin concerto fashion.” 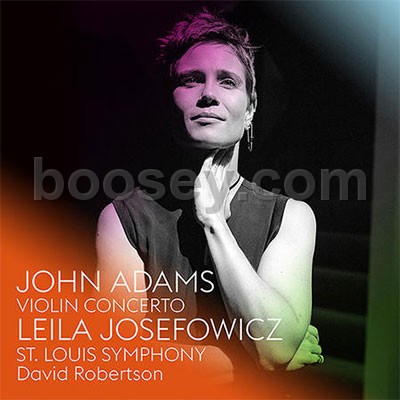