Until very recently this work had only received one performance at a memorial event in 1909 for Stravinsky’s beloved teacher Rimsky-Korsakov, and was then presumed lost. But a chance discovery of a set of parts during the refurbishment of the St Petersburg Conservatoire resulted in the work’s first modern performance at the Mariinsky Theatre in December 2016, conducted by Valery Gergiev. The influence of both Rimsky and Wagner is clear on the young Stravinsky, and it forms the missing link between his early work and The Firebird. But what is most striking is how expressive this processional work is, as its mournful theme is passed between the instruments of the orchestra, each player in turn, as it were, laying a wreath at the tomb of the master. Funeral Song makes a contemplative concert opener.

"...it’s true: this darkly beautiful 12-minute orchestral piece is by Stravinsky. After its premiere in 1909, the score went missing but in 2015 orchestral parts were found in a (thorough) spring clean of the St Petersburg State Conservatory’s library."
The Times

"A Stravinsky premiere must surely count as a red-letter musical day... a processional slow movement in which a constant, though always slightly varied, melody is presented by different instruments, as if filing past Rimsky-Korsakov’s tomb each laying a wreath... bound to become a classic. Every Stravinsky work is a classic!"
Sunday Times

"Shivering low string tremolandos, suggestive of Russian Orthodox church music, pre-empt the opening of Firebird, and there are echoes of Wagner in the brass chords that bring the processional to its eventual close. It’s a work of great nobility."
The Guardian

"...the importance of Funeral Song lies in what it reveals of the artistic development of one of the last century’s great musical geniuses, and its portents of greater Stravinsky works to come (his revolutionary Rite of Spring lay only five years in the future)".
Chicago Tribune 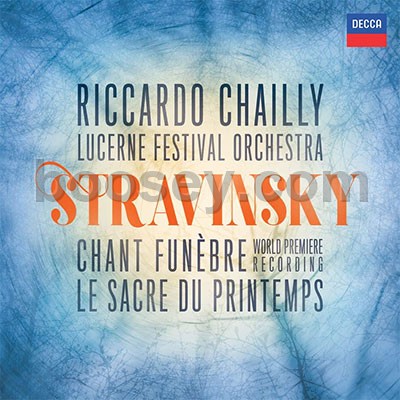