Libretto by the composer and Mira Mendelson, after the novel by Tolstoy (R,E)

In 1809, the world-weary Prince Andrei Bolkonsky encounters the youthful Natasha Rostova, first in the country, then at a ball in St Petersburg. Enchanted, he asks for her hand in marriage. Unfortunately Natasha has also aroused the curiosity of the dissolute Anatol Kuragin. Old Prince Bolkonsky opposes his son’s marriage, on account of Natasha’s family’s poverty and low rank. Natasha is left humiliated and lonely. Anatol and his devious sister Hélène trick Natasha into believing that Anatol is in love with her. Staying with an elderly friend of the family in Moscow, she foolishly agrees to elope with Anatol and is only saved when the plan is betrayed by her cousin Sonia. The gentle Pierre Bezukhov, long-suffering husband of Hélène and close friend of Prince Andrei, explains to Natasha that Anatol is in fact married and that he himself is in love with her but, in despair, Natasha attempts suicide. Pierre forces Anatol to hand over incriminating letters and tells him to leave Moscow at once. News arrives of Napoleon’s invasion of Russia. It is August 1812 and the Russian army under Field-Marshal Kutuzov is preparing to defend Moscow at the battle of Borodino. Andrei laments the waste of his life and especially the loss of Natasha. Pierre suspects that Andrei may not survive the battle. Napoleon is observed exulting in the conquest of Russia, but becomes nervous as the battle fortunes shift. Kutuzov urges the Russians to abandon Moscow, leaving it open to being sacked by the French. In the mayhem, Pierre is among those captured by the French. The mortally wounded Andrei is rescued by the Rostov family and is reconciled to Natasha, before death claims him. As the French retreat over the wintry countryside, Pierre and the other prisoners are freed by the liberating forces of Russia. 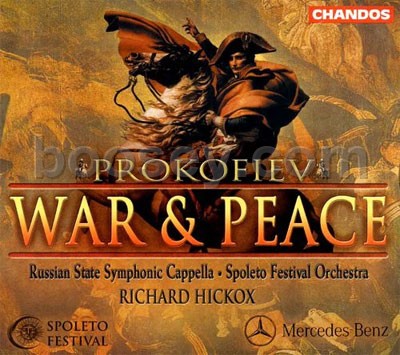