Performance of this work requires a CD, 'Soundscapes', to be played. This is included with the hire set.

Part I – The City of Dis,
or The Ship of Fools
The work opens with a Latin text from the first pages of Das Narrenschiff, followed by the 16th century recruitment text for the Guild of the Blue Barge. Beatrice appears and tells of her request to Virgil to assist Dante on his path through eternity. Two men in a boat are on their way to Dis, the city of flames in hell. They see screaming furies on the roofs of the flaming towers and someone walks over the water. Dante decides ‘I was convinced that she had been sent by heaven.’

Part II - Racconto dall’Inferno
Dante relates a comic tale about one of the senior devils who is showing him the way. This Malacoda gives Dante an escort of ten fearsome devils. A peculiar march is heard as they plod along through hell.

Part III – Lucifer
A long instrumental introduction brings us amongst the deepest horrors of hell. The chorus describes Lucifer, who himself appears as they finish. He is jealous because God had created humanity in His own image and likeness. He cries forth his desire for revenge and rejoices.

Part IV – The Garden of Delights
Dante meets his deceased friend Casella, a musician, who sings one of Dante’s splendid sonnets. Dante sings a song about a terrifying serpent that is hunted by enormous birds, after which Dante is helped to cross the river Lethe and sees an impressive procession of great beauty. Dante is hit by a car and dies. The chorus sings a text from the Song of Songs dedicated to the Bride of the Lebanon.

Part V – Luce Etterna
A light that is music develops from an imperceptible beginning; it is interrupted by an impudent children’s chorus singing a text from the Requiem. Beatrice states that the light is the light of love. The sound of a starry firmament connects the two female soloists. Dante hymns the heavenly bodies and the music of the spheres, only to be interrupted by Cacciaguida, who complains about the people of Florence. The chorus and Beatrice sing of the light of eternity that conquers all sorrow.

“…the distillation of a lifetime’s creativity... There is nothing ethereal about this opera. Its questing vigour is of a materialist, Brechtian, Godardian kind. It relishes the mixture of media, musical quotations and parody, intellectual subtexts and ironic commentary while remaining spunkily itself — a brilliant, new-fangled circus."
Sunday Times 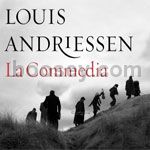