There are neither roles nor dialogue, neither an imaginary scene nor any scenes at all. (And thus there are no clues for staging it, at least not at first sight.) Everything is the scene, but the scene is not everything. For the ‘music’ or, rather, everything that sounds, is completely staged! Yet in a way that is not obvious. Sounds move from left to right, from the back to the front, through the middle, etc., although none of those taking part leave their ‘scene’. This means that the greater part of the action – the opera? – takes place independently of what is going on on stage...

In this deceptive context, sensory perception capitulates or, rather, that which it is considered to be. Finding the position of nearness and distance, of inside and outside, of subject and object, no longer functions; the (hearing) "I" is suddenly without boundaries... Thus the documentary opera is in fact a document on the failure of language. On the limits of communication. (As though one had come to some sort of an end. As though language only speaks of itself and incessantly sends out its clichés into the world, as though it were a machine.)
Iris ter Shiphorst

"Oehring’s own libretto consists of attempts to record observations, everyday wisdom, sayings, clichés, as well as extravagantly laboured expressions: a documentary of the impossibility of communication in today’s society, of the loss of language.

Oehring allocates his text montage to one female speaker, a mezzo soprano and three deaf actresses on three platforms between the instrumentalists sitting in a semicircle. Their gestures are mimicked by the other two actresses. Movements are fed into the sound structure through a dataglove and change the tuning of certain groups of instruments. With the new instrumentalists of the chamber ensemble Neue Musik Berlin, directed by Roland Kluttig, with live electronics, sampler and tape, Oehring ‘builds’ a differentiated, complex sound space, in which the actors, and sometimes even the musicians, can move around freely, keeping in contact with the sound space through headsets and microport systems.

Oehring combines rock rhythms, jazz sequences and electronic sound inventions with the voices of the performers to form a sound score... it opens up room for the various interactions whose musical and scenic gestures grow ever more closely together. 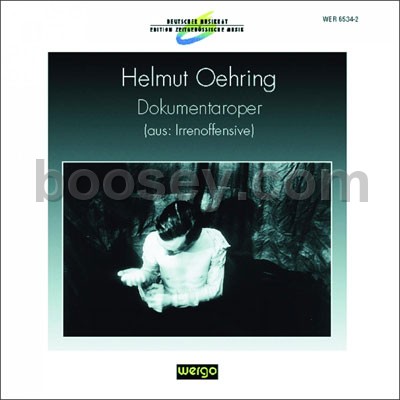