Libretto by Cocteau based on Sophocles (L-F,L-E,L-G)

A speaker appears, to narrate each episode of the story before it happens. He warns us we will watch Oedipus falling into a trap waiting for him since his birth. The city of Thebes is afflicted by plague. In despair, the inhabitants turn to their king, Oedipus, who promises help. His ambitious brother-in-law, Creon, has learnt from the oracle that the plague has been sent because the murderer of the previous king, Laius, is still living in the city. Oedipus vows to find this man. He consults with the blind Tiresias who unwillingly tells him: ‘The murderer of the king is a king’. Jocasta, the widow of Laius and now the wife of Oedipus, tells her husband that Laius met his death twelve years before at a crossroads. Oedipus realises he himself is the murderer. News arrives of the death of Oedipus’s supposed father, Polybus, and the king discovers that he was adopted after being found abandoned as a baby on Mount Cithaeron. Hearing this, Jocasta realises that Oedipus, her husband and the murderer of her former husband, is their long-lost son. Off-stage, Jocasta kills herself and Oedipus, taking her pin of gold, puts out his own eyes. Blinded, he reappears once more in front of the citizens, before turning away and leaving Thebes forever.

Stravinsky called Oedipus Rex an “opera-oratorio” and instructed that it be staged with minimal movement; the principal singers are to wear masks. Crucial to the work’s aesthetic was the decision to set a Latin text - a choice, Stravinsky wrote, with “the great advantage of giving me a medium not dead but turned to stone and so monumentalized as to have become immune from all risk of vulgarization.” The impersonal grandeur of Stravinsky’s retelling is signalled by the opening chorus. At the same time, Oedipus’ downfall is vividly delineated by the gradual defoliation of his vocal line. The musical trajectory - a throbbing engine of fate - is as undeflectable as the drama. In spite of Stravinsky’s principles and pronouncements - that music “is powerless to express anything at all” - the opera culminates in catharsis. Sophocles’ great tale of submission to fate resonates with Stravinsky’s religious sensibility: of submission to God.

Based on the play by Sophocles, Oedipus Rex explores the idea of the formal and the stylised in theatre (as opposed to the expressive and the romantic, which, after the First World War, was decidedly out of favour in France). Central to the work is the Narrator, who describes events before they are presented on the stage. His words, spoken in the audience’s vernacular, are by Jean Cocteau; the sung text is also by Cocteau, but translated into Latin to bring a sense of distance and monumentality to the drama. Even the staging Stravinsky envisaged as being minimal, with the soloist wearing masks – hence his designation of the work as a hybrid opera-oratorio. The music, too, wears masks, adopting for example the style of Handel for Creon’s aria, or of Verdi for Jocasta’s aria, but always viewed through Stravinsky’s lens. The audience thus remains at a distance, in keeping with the contemporary ideas of Bertolt Brecht, watching the unfolding of fate with horror. But the work also has a ‘serenity’ and a ‘purity’ (to use the words of an early reviewer), which lends to it an almost religious character. Thus, a concert pairing with the Symphony of Psalms makes for a fascinating comparison. Common stage pairings include other works by Stravinsky such as Les Noces, The Nightingale or Perséphone, Bartók’s Bluebeard’s Castle, Dallapiccola’s Il Prigioniero, Poulenc’s La Voix humaine or Weir’s Blond Eckbert, strongly influenced by Stravinsky. 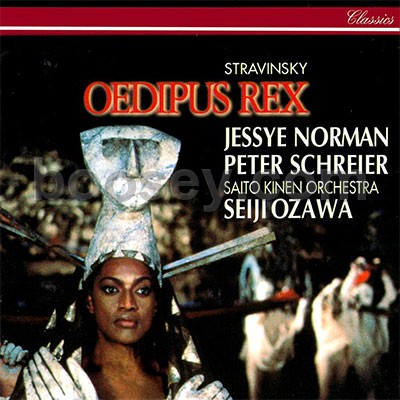