Following a debate on theatre, the Eccentrics win and present 'The Love for Three Oranges'. In the royal palace, the prince is ill with hypochondria, and the only cure is to make him laugh. Down in hell, the wicked witch Fata Morgana beats the magician Chelio at a game of cards. Leander, the prime minister, is under Fata Morgana’s protection and plots with Princess Clarissa and the evil Smeraldina to stop the prince from laughing. The jester Truffaldino's ploys to amuse the prince fail, but when he catches sight of Fata Morgana’s knickers, he bursts out laughing. She curses him to fall in love with three oranges and he sets off with Truffaldino to find them. In the desert Chelio tells them that the sorceror Kreonta’s oranges are in his kitchen guarded by a terrifying cook, and gives them a magic ribbon. Truffaldino charms Kreonta’s cook with the ribbon and he and the prince escape with the oranges. Thirsty, Truffaldino opens two of them and discovers two princesses but, as there is no water, both die. Truffaldino flees in remorse. The prince opens the third orange and finds Princess Ninetta, who is provided with water by the Eccentrics. While the prince is away, Fata Morgana captures Ninetta, turns her into a rat and puts Smeraldina in her place. The prince, returning with the King, is horrified at the change in his bride, but is forced to take Smeraldina to the palace. The Eccentrics capture Fata Morgana and send Chelio to save the situation. When the wedding procession arrives, a rat is found sitting on the throne. Chelio turns her back into Ninetta. Fata Morgana and her accomplices flee and the court celebrates the triumph of good over evil. 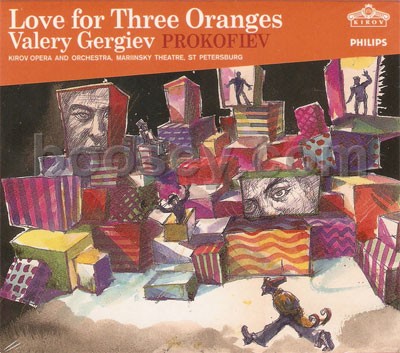