Libretto by the composer, drawn from letters and documents of the 16th century (E-L,G-L,Sw-L)


Taverner is on trial before the White Abbot, accused of following the Lutheran heresy. Witnesses are heard, and the chorus comments, but before judgement can be given Taverner is saved by the intervention of the Cardinal (not named as Wolsey), who needs him for his art. Taverner debates for himself the religious meaning of his music, while monks chant. Then the scene shifts from chapel to throne room, where the King is instructing the Cardinal to obtain him a divorce, while both seem to be puppets in the hands of the Jester; the orchestra here is silent, the scene being accompanied by music for Renaissance period ensemble. The Jester, or Death as he becomes, then calls forth Taverner (and the orchestra). Taverner is confused by cheapjack religious stunts, and brought to seize a sword against Catholic iniquities.


The second act is again in four scenes, and is a black version of the first. There is first another trial, nightmarishly accelerated, in which Taverner is now the judge and the White Abbot the accused, the crime this time being that of adhering to the old religion. At the climax a Wheel of Fortune appears, ridden by the Jester. Then comes a second throne room scene, again accompanied by Renaissance instruments, though now in tart parodies of period dances and keyboard pieces that carry the action forward through the sixteenth century. Monarch and churchman discuss the progress of the Reformation, while the Jester revests the latter as an Anglican Archbishop. The second chapel scene has the White Abbot and his monks at mass, while Taverner criticizes himself for his earlier credulity. A captain enters and spills the consecrated wine, whereupon the monks leave, singing an original Benedictus by Taverner. The final scene is then a big choral tableau in which the White Abbot is brought forward for burning at the stake, and in which Taverner becomes aware that he has destroyed the better part of himself. 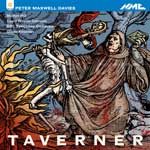