time not specified - a place of worship


Mass is based on the Roman Catholic Mass, as seen from the point of view of a Celebrant who is experiencing a crisis of faith. It follows the liturgy exactly, but the liturgical passages are juxtaposed against frequent interruptions and commentaries by the Celebrant and the congregation, much like a running debate. The Celebrant’s faith is simple and pure at first, as shown in his wish to sing "a simple song" in praise of God. Yet that faith gradually becomes unsustainable under the weight of human misery, corruption, and the trappings of human power. In the end, the Celebrant, on the verge of renouncing his faith, finds that the loneliness of his doubt is no match for the the joy of gathering together with other believers in praise.
Press Quotes 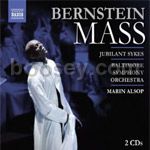