In the idyllic countryside, Anne Trulove and Tom Rakewell celebrate their love. Anne’s father has found a job for Tom in the city, but Tom longs for an easier path to money. Nick Shadow appears with news that Tom has inherited a fortune from an unknown uncle. They must leave for London and Tom need only pay Shadow for his services after a year and a day. In the wicked city, Shadow introduces Tom to Mother Goose’s brothel. Back in the country, Anne fears the worst and decides that she must rescue Tom.

Meanwhile, Tom, in his new London house, is already bored with ordinary pleasures, so Shadow suggests visiting the amazing bearded woman, Baba the Turk. When Anne arrives at Tom’s house, she is horrified to find him married to the hideous Baba. When Tom tires of Baba as well, Shadow appears with one last new idea… a machine that turns stones into bread. Anne again appears to save Tom, but this time his house is for sale and his property for auction. The bankrupt Tom has disappeared with Shadow. Baba urges Anne to follow him.

A year and a day from their first meeting, Shadow brings Tom to a graveyard at night. A terrified Tom discovers he must pay not with money but with his soul. But, as Shadow is about to take hold of him, Tom hears Anne’s voice in the distance and his past love is reawakened. Shadow, defeated, disappears into the ground. Tom survives, but he is now mad and is shut up in Bedlam. Anne comes there to comfort him, but there is little to be done. Her father arrives and persuades her to leave Tom to his fate.

Stravinsky’s largest work, his only full-length work for the theatre, and his first major work in English. It also represents the culmination of his neoclassical years, after which he started to rethink his musical language. The idea was prompted by seeing an exhibition in Chicago in 1947 of a series of Hogarth prints and he instantly recognized their operatic potential. The depiction of the ironic progress of the spendthrift heir of a miser from wealth via debt to madness and death is, in essence, retained in the opera. Stravinsky’s Hollywood neighbour Aldous Huxley suggested he contact the English poet W.H. Auden, resident in New York, to write the scenario and libretto, which Auden did with the assistance of his lover and opera buff Chester Kalmann. The text wittily grafts onto Hogarth’s quest narrative aspects of, among other sources, Classical pastoral, the Faust legend, fairy tale, circus, the Bible and opera in many different manifestations. This is brilliantly matched by Stravinsky’s music, which takes as its source the whole of operatic history from Monteverdi to Verdi via Rossini and Donizetti and large doses of Mozart. Yet it is neither parody nor pastiche; rather, in remaking all of opera into this one new opera, Stravinsky and Auden create a fable appropriate to their modern world: its kaleidoscope of sources speaks of the dislocated, alienated times in which they lived … even if, in a marvellous take on the ending of Don Giovanni, the final epilogue tells us it’s really only a piece of theatre! The Rake’s Progress can be appreciated on many levels, which might explain why it is still one of only a handful of 20th-century operas never to have been out of the repertoire.

One inspiration for this "moral fable" in "Italian-Mozartian" style ("I will lace each aria into a tight corset") was Hogarth's series tracking the downfall of Tom Rakewell, who squanders his inheritance on women, gambling, and drink and dies in a madhouse. In Auden's much admired libretto, Tom is equipped with a sporadic moral conscience, as well as a satanic alter ego: Nick Shadow. As in Oedipus Rex, man is here a victim of implacable forces that control and crush him. But Anne Trulove, steadfast in devotion, rescues Tom's soul. The pervasive detachment of Stravinsky's score doubles the pathos of Anne's final lullaby. 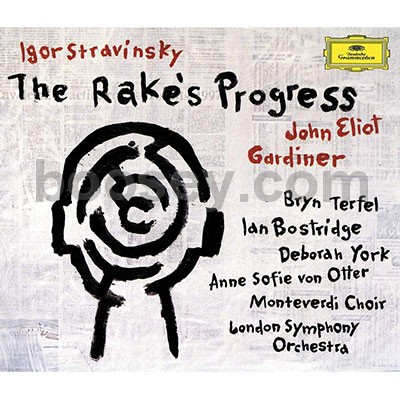