Following the death of his sister and lover, Drusilla, Emperor Caligula disappears. Three days later he returns, dirty and completely changed. Not only does he order his former slave, Helicon, to bring him the moon, but he also enacts absurd and brutal laws. He reveals his plans to his wife, Caesonia: he wants to enforce the elimination of evil in the world and hold an excessive feast. Appalled though she is, she confirms her love for him. Faced with Caligula’s ever more apparent madness, the senators are conspiring against him when the Emperor suddenly surprises them at their secret meeting. In their presence, he rapes the wife of one of them, not giving them a chance to prevent it, and forces another one to drink poison. The only one to defy Caligula is the poet, Scipio, who is not frightened by Caligula’s threats.

During some festivities, Caligula appears as Venus – he has decided to marry the moon. He forces all the guests to worship him. Helicon has got hold of a wax tablet which contains evidence of Chaerea’s conspiracy. Caligula destroys this evidence but lets Chaerea go. Impressed by the sheer scope of Caligula’s power, the avengers cannot help but join in the worship. The Emperor, however, senses his impending death. He is desperate because Helicon is unable to bring him the moon to his relief. To provide some distraction, he sends for four poets and an audience but after briefly listening to their presentations, he sentences them all to death. The conspirators have just resolved to put an end to the tragedy that very night when suddenly Caligula’s death is announced. As they are expressing their relief, the Emperor appears – the message was a trick. Caesonia makes a last attempt to move him; he, however, demands her death as the ultimate proof of her love. She agrees to be strangled by him. Alone, Caligula is overpowered and killed by the conspirators. 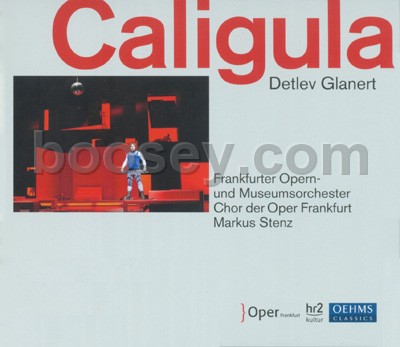