It was in Nazi-occupied Warsaw in I943 I heard the shattering news that in Katyn Forest in Russia many thousands of defenceless Polish prisoners-of-war had been brutally murdered, their hands tied behind their backs, shot one by one, a revolver fired into the nape of their necks at the brink of their mass grave which they had been forced to dig for themselves. At the time the Germans pronounced that this massacre was committed by the Russians, while the Russians insisted that it was a Nazi crime. After so many years, long after all possible other major war criminals had been found and punished, I felt haunted by the spectre of that massacre at Katyn, which remained still unspoken of and officially unresolved in spite of numerous documents and other indications of Russian guilt. I composed Katyn Epitaph to express my personal sorrow that the Western civilised nations have allowed this crime to remain forgotten, and I dedicated this piece to the memory of the 15,000 Polish patriots who were slaughtered while completely defenceless, and who had committed no other crime than to wish to defend their own country.


This Epitaph has a most simple structure: after an introduction by the solo violin a long passage is played by the woodwinds; in the second half of the piece, the soloists of the string orchestra start a gradual crescendo building up to the tutti fortissimo. The whole piece is a continuous thread made out of a 3-note cell - just two intervals: a major and a minor second. 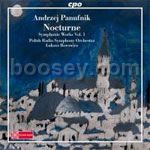