I was always attracted to the rustic art of Poland, especially the intricate, colourful paper-cuts, created through the long winter evenings by the imaginative and dextrous Polish peasants. These paper-cuts were usually semi-abstract, with symmetrical designs incorporating flowers, trees, animals, sometimes even people and country scenes. I decided to compose a large-scale work in which I could transfuse these primitive, naive elements into music.

I used some fragments of Polish folk themes as a basis for the musical material, and adopted a symmetrical framework for the whole composition as well as a symmetrical layout for the orchestra. The separation of the two string orchestras is not just a visual reference to the paper-cuts; its main purpose is acoustical, the music 'stereophonically’ composed, allowing the listener to hear clearly the dialogue between the two string orchestras.

Despite the folk origins and direct character of this work, once the Stalinist ideological and artistic dicta were enforced in Poland in 1949, Sinfonia Rustica was condemned politically as ‘alien to the great socialist era’, and the Polish Minister in the presence of the General Secretary of the Soviet Composers' Union supposed himself to be pronouncing the 'final verdict' when he said "this work has ceased to exist"!


For the explanatory diagram and orchestral layout which illustrate this note please see the programme note section on www.panufnik.com 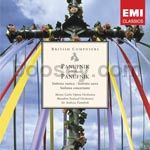