This symphony is dedicated to the Black Madonna of Czestochowa, the symbol for all Polish people of independence from invading powers, also of profound religious dedication.  At the time that this symphony was commissioned, in the early 1980s, the Black Madonna had become the symbol of the insurgent Solidarity Movement, the non-violent rebellion within Poland against Soviet domination, which led eventually to the end of the Cold War.

With icon painters in mind, I designed Sinfonia Votiva by fitting it into a simple geometric figure, the circle, and I chose the number 8 (this being my 8th Symphony) as the internal geometry, and as guiding principal for its structure and musical language.


Seeking the architectural framework for this symphony, I created in my imagination a “mother diagram” - two large circles combined into a figure 8, which represent the two movements of the symphony, and which contain the more complex inner structures of the work.  [For diagrams, musical examples and extensive detail about the construction of the symphony see programme note section on www.panufnik.com].

Though these two movements differ greatly in emotional content as well as in contrasted tempi (1. Andante rubato;  II. Allegro assai), organically and in their construction they are both exactly the same, owing to the transcendental quality of the geometry and the application of an extremely strict discipline in sound organisation.


In Sinfonia Votiva I have faced the challenge of attempting to fuse two apparently incompatible elements: instinctive spontaneity (subject) together with a purely intellectual concept and control (framework). But the structure of this work should for the listener remain an invisible skeleton holding in unity the musical material, and it is my hope that, during performance, the emotional and spiritual elements will totally dominate. 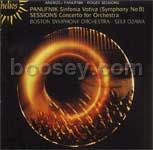