Symphony No. 9, with its subtitle Sinfonia di Speranza, reflects my musical interpretation of the ideal of hope: within its notes I have tried to incorporate a spiritual message, an expression of my faith in mankind as well as my longing for racial and religious tolerance among all people. This ideal (very frequently in my mind) seemed to dominate me more and more as I contemplated this commission, so that it became the absolute rationale of the work, not only in homage to Beethoven's ninth symphony, but because the ninth decade of this century seemed to call for a new expression, a more positive response to the turmoil of our time. Living in the shadow of violence and terrorism, my thoughts of the future had too often been pervaded by pessimism: now I found myself endeavouring to write music of uplifting character, attempting to revive the springs of hope.

Having taken hope as my theme, I chose the rainbow as my guiding symbol, not only because, since ancient times, it had inspired contemplation and philosophical thought, but because of the extraordinary properties it offered me in designing the structure of my new symphony.  I wanted to translate into my musical material the laws of geometric optics, those
mysterious hidden relations such as refractions within reflection and symmetries within symmetry. The shape and colours of the rainbow dictated to me the framework for this work, which is composed on two planes;  a continuous, flowing melodic line, and, in contrast, the simultaneous progression of a 3-note cell with its perpetual reflections and transpositions.  The symphony is made up of twelve arcs, each with similar construction.  In the first arc, the 3-note cells set out from a lower register, working their way upwards until, having reached the highest point, they gradually descend again to complete the arch form.  Simultaneously, the melodic line, mirroring the cells, flows from the high notes through the low and back to high. The same form is used for the first three and last three arcs.

In the central group of six arcs, the procedure is reversed: the 3-note cells begin high and dip before rising again, mirroring the melodic line which starts low, and climbs to form the arc. These groups of arcs are divided by two extended transitory episodes, where both planes run more-or-less horizontally. The colours of the rainbow symbolise a spectrum of feelings and emotions. The first three arcs are expressed in 'warm' colours reflecting the intensity of an invocation of hope.  In the middle of the work, the music passes through the 'cold' colours representing doubt, fear, hopelessness, even despair. The last three arcs return to the 'warm' colours, and the symphony ends with a persistent call for a more positive approach to the future.

I set myself the formidable task of composing a continuous melodic line of about forty minutes duration, penetrated and shaped by 3-note cells From the beginning of the symphony (except for, the first few introductory bars in unison) right through to its very end.  The beginning of this melodic line E-B-A-A-E-E  (sometimes inverted  E-A-B-B-E-E) could be understood as a motif of hope. This motif is interwoven into the melodic line as many as 18 times, in the 'warm' arcs and the linking episodes, but not in the central 'cold' arcs of the composition.

The symphony is part of my unending search for a new musical and spiritual dimension. Once more I was attempting to balance a severe, self-imposed technical discipline with an expression of my deeply felt emotions.  My fervent wish is that this message of hope might speak directly to the listener.


For the musical examples and explanatory diagrams which illustrate this note, see programme note section on www.panufnik.com 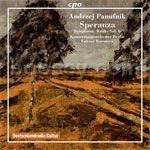