When Yehudi Menuhin asked me to compose a violin concerto for him, I immediately had in mind his unique spiritual and poetic qualities and I felt I should provide a vehicle which would accentuate these rare gifts, and not obscure his deep inner musicianship by virtuoso pyrotechnics.

I treated the violin as a singing instrument so, though keeping within my strict self-imposed discipline of sound-organisation, I constructed rather long and unbroken melodic lines. To further expose the solo part and keep it ever-prominent, as well as to achieve a specific colour and texture, I chose to use an orchestra consisting only of strings.

The Violin Concerto is composed in three movements:

is built on alternating minor and major thirds, which the orchestra introduce and which are then taken up by the soloist. I wanted to write this movement with utter simplicity and frugality of means but with much Poetic content, again giving the soloist the opportunity for self-expresssion to speak profoundly through a sparse and most transparent framework. 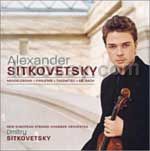