A concerto for two violins (one in the classical style and one traditional), Inishlacken was named after an island off the Galway coast and has been inspired by living in Connemara and by many visits to that now deserted island. The first movement imagines a trip in a currach out to Inishlacken. The vigorous rowing is given a break in the middle of the movement, as we look back at the Twelve Pins and the beautiful Connemara landscape, prior to taking to the oars again. In the second movement the two soloists become part of the wildlife of Inishlacken. As summer arrives, the island is host to many terns coming back from their winter migration. Both violins mimic the whirling flight of these restless seabirds as they wheel and swirl around the island. In the last movement, we evoke the evening on Inishlacken as the quiet sunset is replaced by the music and dance of a community which has now sadly long departed. 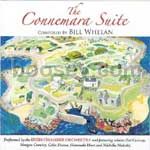