The work as a whole was completed on March 22, 1985—four years and a day after The Infernal Machine was finished—and was composed on commission from the Saint Louis Symphony Orchestra through a fellowship grant from the National Endowment for the Arts. The title comes from the writings of the great physician and occultist Paracelsus, who refers to phantasmata as "hallucinations created by thought." The first movement, "The Evestrum of Juan de la Cruz in the Sagrada Familia, 3 A.M.," also makes use of Paracelsian terminology—"evestrum" is Paracelsus' name for the astral body; thus, this opening movement represents a dreamt out-of-body "somnambulatory journey" through Antoni Gaudi's remarkable Cathedral of the Sagrada Familia in Barcelona. Scored only for strings and percussion, it is followed by The Infernal Machine, which employs the full orchestral apparatus. This constitutes a darker hallucinatory image, as the immense juggernaut, eternally in motion for no particular purpose, is represented by a perpetuum mobile wherein the leviathan sometimes whirs along in mercurially unconcerned fashion but at others groans or throws off slightly hellish sparks, grinding occasionally as it changes gears. Bump is a "nightmare conga" characterized by a bass drum stroke on every fourth beat whose oppressive obstinacy adds to the overall feeling of menace. The title, referring as it does to dance floor bumping with hips or buttocks, may imply a certain impish quality to the movement, but the harrowing surrealism of its execution should belie any suspicion that it is largely "light classical" in orientation; if I had a corresponding visual image for Bump, it would be akin to a gala Boston Pops performance in Hell.

All three movements of Phantasmata were therefore inspired by dream images—the first mystical, the third secular, The Infernal Machine somewhat more amorphous in origin—hence the work's hallucination-related title. "The Evestrum of Juan de la Cruz in the Sagrada Familia, 3 A.M." is dedicated to Joseph Schwantner, The Infernal Machine to Leslie Bassett, and Bump to Leonard Slatkin. The complete Phantasmata, premiered by Leonard Slatkin and the Saint Louis Symphony Orchestra on October 24, 1986, lasts approximately eighteen minutes. 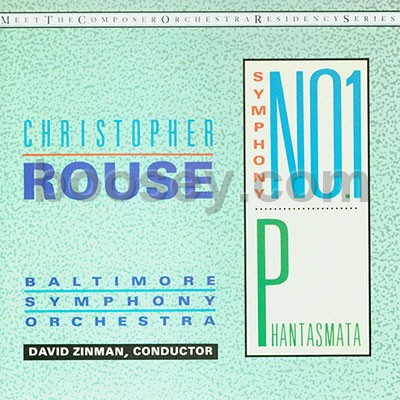