I completed my Violoncello Concerto on October 27, 1992 in Fairport, New York. The work was commissioned by Betty Freeman for Yo-Yo Ma and the Los Angeles Philharmonic Orchestra.

During the long gestation and composition of the concerto, the music world lost a number of significant creative figures, several of whom were personal friends. The loss of Leonard Bernstein and Aaron Copland had been reflected in my trombone concerto, completed early in 1991. The next two years saw the passing of Olivier Messiaen, John Cage, and William Mathias, among others. Especially dear to me was the loss late in 1991 of Sir Andrzej Panufnik, whom I had come to know only in the final years of his remarkable life. Even more painful was the sudden death on my forty-third birthday of William Schuman, for almost thirty years a friend and mentor of incalculable importance in my life. As a result, my violoncello concerto became a meditation upon death—the struggle to deny it and its ultimate inevitability.

I elected once again to use the two-movement form that I had employed in my violin concerto of 1991, although the slow-fast movement order of that earlier score was here reversed. I also chose to title the two movements after Monteverdi sources. The first movement, "Combattimento," pits the soloist against the orchestra in a battle for supremacy reminiscent of the nineteenth century manner, the orchestra goaded much of the time by the hissings and rattlings of unpitched wooden percussion instruments. Ultimately, the orchestra's ever more powerful assaults prove too much for the solo cello, and at the very end of the movement it is "bitten" or "stung" by the aforementioned wooden percussion. The ensuing cadenza leads to the second movement, "Adagiati," a movement which spends much of its duration in a state of quiet suspended animation, elegiac and contemplative. Near the end of the work come interspersed quotations from two disparate pieces—Arnalta's lullaby from Act II of Monteverdi's "L'Incoronazione di Poppea" ("Lie down and rest…sleep, my soul") and William Schuman's song "Orpheus with his Lute." Gradually, the voice of the solo cello is stilled, though it is the serpentine wooden percussion who have the final word.

I always find it a challenge to decide to whom to dedicate the works I have written, but in this case the decision was doubly difficult. Such a dedication could deservedly go to the Los Angeles Philharmonic itself, for whose seventy-fifth anniversary season the concerto was written; or to my old friend, the magnificent cellist Yo-Yo Ma; or to David Zinman—who conducted the first performances and subsequently recorded the score with Mr. Ma—a friend and colleague to whom I owe so very much; or to those who are memorialized in the music. I finally elected to dedicate the score to Betty Freeman, who lost her husband during the time the work was composed. Ms. Freeman's support of living composers and their music has been justly legendary, and I certainly would not have had the opportunity to write this concerto without her support, both financial and spiritual.

As I was nearing the end of work on the concerto, I happened to reread Edgar Allan Poe's "The Conqueror Worm" and was struck especially by that poem's final verse, which I have placed in the score as a motto:

Out—out are the lights—out all!
And, over each quivering form,
The curtain, a funeral pall,
Comes down with the rush of a storm,
And the angels, all pallid and wan,
Uprising, unveiling, affirm
That the play is the tragedy "Man,"
And its hero the Conqueror Worm. 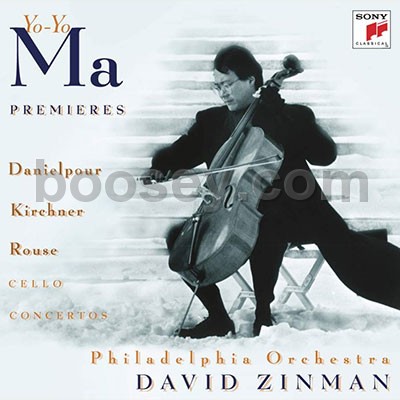