“Subtitled Songs and Dances for Large Orchestra, this continuous 25-minute piece shares some basic material with Glanert’s opera-in-progress, based on Albert Camus’s play Caligula. Yet it’s not a study for the stage work, rather a kind of anatomical dissection of  ‘man as beast… a glimpse into the inner soul of a monster as human beings can become’… The mood of the piece is uneasy, closer to that of Ravel’s La Valse than anything else.” (Andrew Clements, The Guardian, 28 Jul 2005)

“From its convulsive opening to its hypnotised conclusion, this is an arresting piece of work. Glanert does not fight shy of direct representational tactics, such as the crawling double bassoon writing for the (unspecified) monster. But there is a purposeful inner momentum too, thanks to a strong rhythmic backbone and effectively scored harmony.” (David Fanning, The Daily Telegraph, 27 Jul 2005)

“The key to Glanert’s intentions lies in the work’s dedication to Shostakovich. That composer was a master at using popular forms – the march, the waltz – as vessels for black satire and despair. Hence the dance spirit here, always hovering on the grotesque, in increasingly fractured instrumentation.” (Geoff Brown, The Times, 28 Jul 2005) 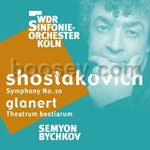