Detlev Glanert found these four short poems at various stations in Germany and was at once fascinated: by their fragmentary nature on the one hand and by their poetic richness and power on the other. The composer wanted to explore this kind of poetic street culture by using several typical street music instruments, such as the recorder, guitar and small percussion instruments. He was interested in using aspects of the coincidental and of improvisation as a means of creating musical form. All this resulted in a small but complex cycle of songs, based on a strangely fragile and beautiful world which was discovered accidentally, just like a piece of lost property, and recreated in a composition.
Thomas Tangler

"Melancholically low and squeakingly high flute, guitar and rattle sounds and various percussion instruments play around the singing. With all the playful wit, Glanert does not deny his melancholy disposition. In the concluding song, the simplest of words, ‘Flieg, Engel, flieg’ (‘Fly, Angel, fly’), have provided the richest source of inspiration for the composer: a tinge from pop music in the electronic organ merges with the soprano sounds in tender rapture. Lots of cheers." (gdt, Die Welt, 12 Feb 1992)

"A work of remarkable density, based on expressive texts of melancholic beauty which Glanert ‘illuminates’ with surprisingly imaginative power." (z.r., Hamburger Abendblatt, 12 Feb 1992) 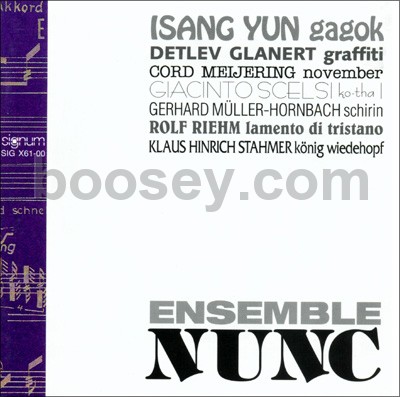