"Music with Brahms" is the subtitle of Detlev Glanert’s Weites Land (Open Land) – and this is true in many ways. Immediately recognizable points of departure are the first four measures of Brahms’s Fourth Symphony with its characteristic alternation of a descending third and ascending sixth. Both intervals are woven into the texture time and again, until the surprising conclusion. Yet Glanert does not paint over Brahms in his free compositional reflection, but rather at most vaguely takes up his attitudes and gestures, for example, a never overwrought lyrical reminiscence or defiant-vigorous outbreaks. And last but not least, precise motivic work that Brahms would have enjoyed. A further point of reference to Brahms lies in the title: "There is much Northern Germany in it, the Brahmsian smell of marshland and wide skies," says Glanert, who like Brahms was born in Hamburg, about his piece, which was premiered in 2014. The "Open Land" is the resonance space of a music that spreads its wings not without melancholy.
Kerstin Schüssler-Bach

"Glanert’s Weites Land takes the first notes of Brahms’s Fourth Symphony as the starting point for an edgy, whirling orchestral fantasy... packing a sense of epic scale into its 11 minutes."
The Guardian 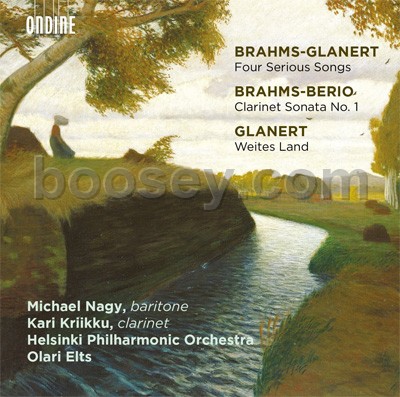