Popular music was always a big part of Shostakovich's work. In 1932 he decided to try his hand at operetta. The project was abanadoned shortly after he started and all that survives are these nine numbers from the first act. They are enough to show us that 'The Great Lightning' would have been a sparkling and satirical piece about the visit of a Soviet delegation to a corrupt Western capitalist country.


This surviving music shows the young Shostakovich in his most light-hearted mood. It is full of deft parodies and catchy tunes that vividly evoke the popular songs and dances of the 1920s and '30s. The final item is a purely instrumental number, a lively procession of dancing models down the catwalk in a fashion show. The whole sequence lasts only just over a quarter of an hour, and would make a charming addition to a concert of light-music favourites. 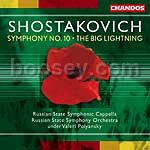