The symphony is cast in a sustained, 25-minute single-movement arch, not unlike the Sibelius Seventh Symphony, a work that has had an immense effect on Adams's compositional thinking. The opening, with its pounding timpany and Varèse-like jagged brass fanfares, conjures a devastated post-nuclear landscape. The frenzied "panic music" that follows comes from one of Act Two's feverish tableaux that evoke the fierce electrical storm that lashed the test site in the hours before the bomb's detonation. The ensuing music is taken from moments that describe the intense activity leading up to the test. One hears the US Army General Leslie Groves, here impersonated in the boorish trombone music, berating both the scientists and his military subordinates, music that gives way to the ritual "corn dance" of the local Tewa Indians. The symphony concludes with an instrumental treatment of the opera's most memorable moment, a setting (originally for baritone voice, here played by solo trumpet) of John Donne's holy sonnet, "Batter my heart, three person'd God"  This is the poem that the physicist hero of the opera, J. Robert Oppenheimer, loved and that inspired him to name the desert test site "Trinity."

Reproduction Rights:
This programme note can be reproduced free of charge in concert programmes with the following credit line:
Reprinted with kind permission of Boosey & Hawkes. 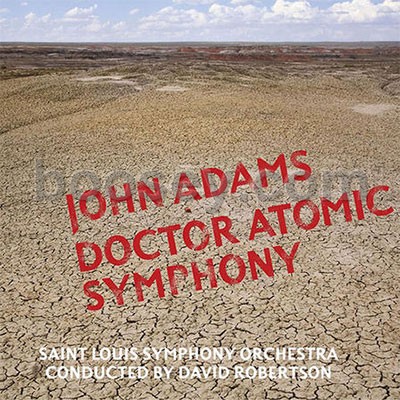