Once I received a commission for composing a piece for the Carlos Chavez Symphony Orchestra, I decided to pay homage to the great Mexican composer after whom the orchestra was named by writing a contemporary version of nationalistic music. To achieve this, I asked myself what my ultimate expression of nationalism was, and I concluded that witnessing the Mexican soccer team winning an important match was such a moment for me.

So I chose the biggest achievement in history of Mexican soccer as the main theme for my piece, the winning of the FIFA Confederation Cup against Brazil in Mexico City in 1999.

I downloaded the match report and assigned the woodwinds as the Mexican players, the brass as the Brazilians, the percussion as the bench, the strings as the audience, the harp and piano as the coaches, and the conductor as the referee. Afterwards I drew a chart containing the most relevant moments of the game, such as the scoring of the goals, the replacement of players, the drawing of yellow cards, and of course the fouled-out Brazilian defender played by the bass trombone, whom the conductor is supposed to warn with the yellow card before throwing him off stage with the red card, near the end of the match.

The musical themes are based on both Mexican and Brazilian folk music ostinatos, as well as in very-well-known-by-every-Mexican courses and chants that occur in soccer stadiums throughout the country, e.g. “La mantada”, “El lero-lero”, “El Q-lero” and “Ínguesu”.

These musical items are truly popular themes that you can hear not only in stadiums, but also in every traffic jam, quarrel and demonstration occurred in Mexico; hence they are nationalistic and contemporary in nature.

"The Tanglewood Music Center Orchestra’s program on Monday evening was the highlight ... It began with ínguesu (2003), a piece of inspired madness ... the action follows the game play by play: at one point the conductor signals a penalty, and a trombonist is ejected. ínguesu is not brain surgery, as new music sometimes is, but Mr. Chapela’s vivid scoring and energetic style hopping (Minimalist chugging blossoms into full-fledged neo-Romantic give and take) keep it entertaining, even for a listener uninterested in soccer..." (Allan Kozinn, New York Times, 13 Aug 2009)

"True, there have been pieces about American football (Ives’ tone poem depiction of a Yale-Princeton game) and baseball, but Inguesu might be the first piece of program music based on a World Cup soccer final! ... The performance of Chapela’s piece was a highlight at Tanglewood’s Festival of Contemporary Music earlier this month. The Festival Orchestra gave a convincing performance that reminded listeners of ínguesu’s purely musical appeal ... ínguesu employs snatches of popular melody, but its overarching rhetorical conflict is a postmodern one: between the ostinati of minimalism and a taut, refreshing take on neoromanticism. Rather than troping Teutonic masters, Chapela’s romanticism restores its sense of adventure and eschews overwrought gesture ... One hopes that Chapela’s homage to soccer turns into a curtain-raiser on many subsequent concert programs." (Christian Carey, sequenza21.com) 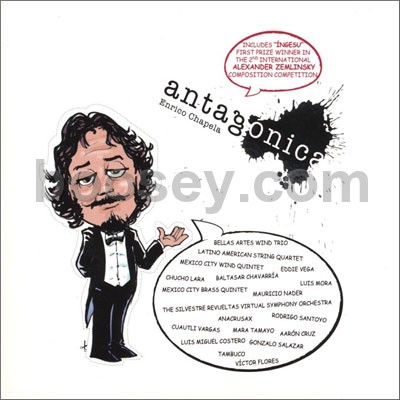