Composed between 1932 and 1936, this cycle contains two of Finzi’s best known songs Rollicum-Rorum and To Lizbie Browne. Curiously, in a self-effacing moment, he described these pieces as "the two worst in the set", an opinion which says more about Finzi’s introvert character than his artistic judgement. The exuberance of the former song and the simple pathos of the latter in which the music and the text seem to have been forged together, speaks memorably to the listener, whilst the drama of The Clock of the Years is terrifyingly vivid. As Stephen Banfield writes, "In some ways this is Finzi’s richest score". 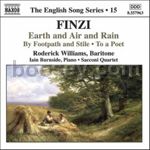