Thanks to Balanchine, Agon is by far the best-known of Stravinsky's non-tonal works. A distillation of rhythmic energies, of dance gestures, of deft instrumentation (with prominent parts for mandolin, harp, timpani, and castanets), it is a plotless ballet whose long gestation accounts for its exceptional range of tonal and serial ingredients.

Agon joined Apollo and Orpheus as the final work in a trilogy of Greek-inspired ballets Stravinsky made in close collaboration with Balanchine. Agon, however, has no scenario: it is entirely abstract. Its stylised structure and formal language are more a meditation on the idea of dance, and on the idea of Greek myth as contest, game or struggle (the meaning of the Greek title). It plays with the number 12: there are 12 dancers; there are essentially 12 dances (excluding the instrumental Prelude and Interludes, which punctuate the structure); and it also contains aspects of Stravinsky’s own interpretation of the 12-note (serial) compositional method. If this all sounds coldly mathematical, then the exuberant playfulness of the music will come as a great surprise! It works equally well in the concert hall as on the ballet stage. Pierre Boulez would often conduct Agon as part of programmes of later 20th-century modernist music. It could be coupled with such works as Birtwistle’s In Broken Images or Andriessen’s Agamemnon, or even Boulez’s own Le Marteau sans maître. 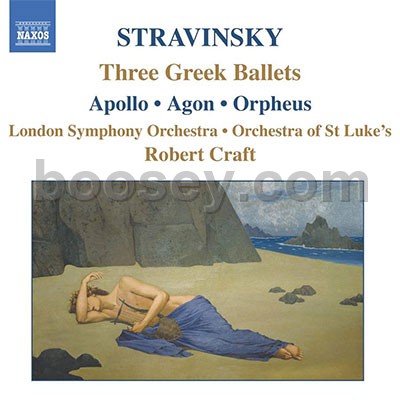