Even for Stravinsky, the Symphonies of Wind Instruments is strikingly original, grounded not in the "symphonic" genre but – as the musicologist Richard Taruskin has shown – in the Russian Orthodox service for the dead. It began as a serene and archaic chorale composed in memory of Debussy. Stravinsky then expanded this "Fragment" with music more popular in flavor. The chorale, at the close, became an apotheosis sublimating an eclectic wealth of material. The ensemble eschews strings in favor of colorful, chanting winds. According to Stravinsky, in 1936: "I did not, and indeed I could not, count on any immediate success for this work. It lacks all those elements that infallibly appeal to the ordinary listener, or to which he is accustomed. . . . It is an austere ritual which is unfolded in terms of short litanies . . . This music is not meant to 'please' an audience, nor to arouse its passions." More than half a century later, the religious elan of the Symphonies of Wind Instruments seems both pleasing and arousing.

The Symphonies began as a memorial tribute to Debussy, who died in 1918, and took the form of a piano chorale – that is, a slow, simple and solemn sequence of chords – published in a commemorative issue of a French journal. Later Stravinsky decided to turn this tribute into a longer instrumental piece, for which the chorale would provide the ending, as if concluding a liturgical work. The abstract title uses the word ‘symphony’ in the plural simply to signify a ‘sounding together’ – it is certainly not symphonic in the Beethovenian sense of the word. Its most striking aspect is its innovative, block structure, where each short musical section has its own distinct identity (harmony, rhythm, tempo), like a coloured tile in a mosaic. Its form has served as a model for so many radical composers since, from Varèse to Messiaen, from Tippett to Birtwistle. 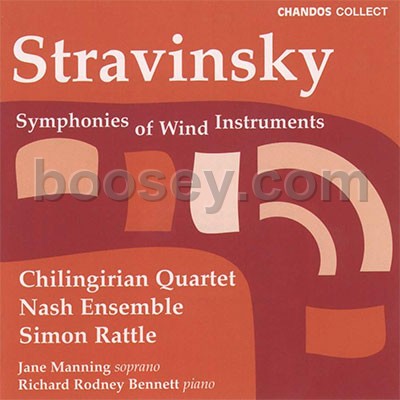