Composed in 1996, this work was premiered in 1997 as part of the celebrations of the Year of Ninian, one of the founding father of Christianity in Scotland. St. Ninian, the first bishop of Whithorn, was believed to have arrived in Galloway in the south-west of the Country in 397 AD, nearly two centuries before St Columba landed in Iona. I grew up in the south-west of Scotland, where over the centuries people have had a special devotion to Ninian, continuing to the present day. The concerto has links geographically and musically with the congregational Galloway Mass which I wrote in 1996 for one of Ninian's successors, the Rt Rev Maurice Taylor, Bishop of Galloway. The three movements are based on three of the so-called Miracles of Ninian, strange and evocative tales about the saint and his followers, documented in a Latin poem written a few centuries after his death. As well as being a concerto, the work is therefore also a collection tone-paintings which give an impression of these ancient tales.

The first movement describes how reivers came by night to steal Ninian’s herd of cattle. The bull attacked and killed their leader who was subsequently resurrected by St Ninian. The bull, in a rage, stamped and imprinted its hoof-mark in solid rock "as if it were the softest wax". The stealth, tension and violence of this tale are represented in the music through a series of metric modulations which alternate a creeping, unsettled material with that of a more visceral and aggressive character. Ninian’s compassion is the influence behind the long slow expressive section before the end.

The second movement is based on the story of the crippled boy Pectgils who "received the tonsure and lived for many years within the walls" of the monastery at Whithorn. He lay asleep beside Ninian’s tomb and dreamt of the saint, in the shining vestments of a bishop, placing a healing hand on his head. Pectgils, who had never walked in his life, struggled up and, getting safely to his feet, "danced over the marble floor". The music is in two parts, firstly a dreamlike sequence where the main theme from the Mass is modally altered and carried on a calm and broody clarinet line while resonated as a harmonic texture throughout the orchestra. Gradually the music becomes more unsettled and leads to the second section where the theme is transformed into a lively dance.

The third movement draws on the description of another mystical vision. A celebrant offering communion at the Whithorn monastery was confronted, in place of the bread, by the person of Christ as a tiny child. The priest took the baby in his arms, kissed him and laid him down again on the communion paten. As he knelt to resume the Mass, the bread was restored to its place. "The holy man was deemed worthy to eat of the holy sacrament, and he belched forth sacred hymns from his throat after he had eaten." The music begins with the solo clarinet murmuring and whispering, as if in a private world of prayer. Gradually chant-like interjections in the orchestra lead to music of a more incantory nature. A huge, sustained chord based on C# grows to form a central pivot from which emerges the second section. The music here is marked ‘quasi-chorale’ and ‘solemn and intoxicated’ and is led principally by the brass. These outbursts form refrains to which the clarinet answers, three times, with an expressive and sometimes raucous cadenza. The final brass chorale leads to a coda involving a complex combination of solemn music, dance music and high frenetic scurrying textures. The final section has all the woodwind instruments playing exultant, braying, individual lines which gradually peel away leaving the solo clarinet with distant gongs and bells.

"Using from the start the full dynamic and registral range of the clarinet, MacMillan seemed to be evoking memories of the stark lines and flashing gracenotes of the piobaireachd, the ancient music of the bagpipes."
The Independent

"MacMillan's exceptional strength is his use of the orchestral palette. And here, Ninian is downright amazing... as a concertoit is riveting with the soloist and orchestra in spellbinding dialogue, reaction and confrontation..."
Glasgow Herald 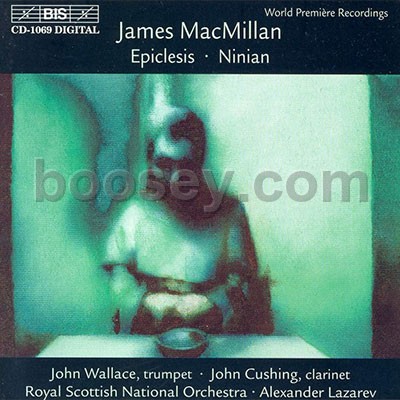