This work was written for the Britten Sinfonia and Nicholas Daniel, and is dedicated to him. It is in three movements. The first opens with a gradual building up of rhythmic layers on violas, bassoon and trumpet before the soloist joins in. Suddenly the music is thrown forward by a metrical modulation and becomes very fast, flighty and virtuosic. Structurally, the music eventually goes into reverse before a solemn coda.

The second movement is based on an earlier work for solo oboe, in angustiis... The solo material is expressive and sad, and enters into much dialogue with other wind instruments throughout. The reflective character of the movement is interrupted by little dyadic patterns, various pizzicato outbursts, some scherzo-like material and agitated faster passages, but the principal mood is introverted and cantabile.

The last movement begins brashly and has a clownish character. The overall feeling is extrovert and dramatic, showing off the oboe in fast display. Some of the original ideas from the opening movement are re-introduced in new guises, before an exultant and joyous ending.

"...MacMillan at his very best, shifting fluently between evocative soundscapes and shot through with moments of haunting beauty."
The Guardian 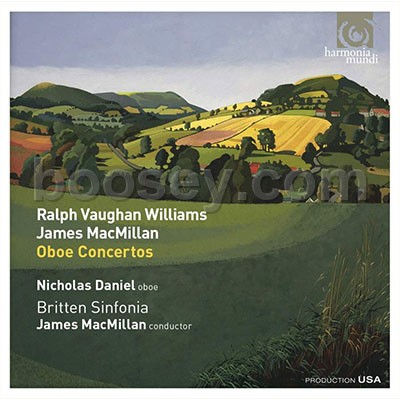