The inspiration for my third symphony, subtitled "Silence", comes from the novel of the same name by one of Japan's greatest 20th century writers, Shusaku Endo, who died in 1996. His book asks profound philosophical questions and resonates with one of the most anguished questions asked 2,000 years ago "My God, my God, why have you abandoned me?" Endo's "silence" is the silence of God in the face of terrible events springing from the merciless nature of man: torture, genocide, holocaust. After experiencing one of these events, one of Endo's characters writes: "I cannot bear the monotonous sound of the dark sea gnawing at the shore. Behind the depressing silence of this sea, the silence of God… the feeling that while men raise their voices in anguish, God remains with folded arms, silent."

For Endo, though, this silence is not absence but presence. It is the silence of accompaniment rather than "nihil". This is a notion that has many musical analogies. Music itself grows out of silence. The emptiness and solitude of a composer's silence is nevertheless pregnant with the promise of possibility and potency. The immateriality of music points to the reality of different types of existence. Music is not a physical reality in the sense that we are, or any other thing is. You cannot see, touch or taste music, but its powerful presence always makes itself felt.

The connections between music and silence are made palpable in the third symphony. The work begins and ends in silence and the climax is a prolonged fermata. From the first silence, a simple naturally evolving melody grows organically, punctuated by other structural silences, woven into the fabric of the music's development. Although much of the resulting textures are complex and coloured, the overriding priority is thematic and the music is led by an expressive and melancholy line, tinged with the influence of the Japanese shakuhachi. This is made clear in a section for three flutes, accompanied by marimba and cello harmonics.

Soon after this a distant piano introduces a new thematic source – simply harmonic, limpid and lyrical in outline – it becomes the second main material which now grows in tandem with the existing music. Throughout this opening section there is much experimentation with intimate chamber sonorities and the horizontal lines are inflected with microtones, attempting a bridge to the sound world of the East.

The music now grows in scope, density and drama. Faster material is introduced when a dance-like version of the piano's lyrical theme is introduced on two solo violas, which is then overlapped by a high, swirling and ornamented treatment of the original theme. The interaction of these with an ever-present chorale whips the music towards its inevitable crisis-point.

The climax is an elongated silence from which the music begins to go into reverse. However, this procedure is interrupted as the music changes direction and sweeps unexpectedly towards entirely new material – a fast scherzo which then subsides into a slow and stagnant section, subtitled "The Swamp" – a reference to an idea in Endo's book, representing a desolation and emptiness which can nevertheless produce life.

There is here a deliberate allusion to the opening of Wagner's Das Rheingold, with drones and sonorous horn-calls, signifying a new life, or a new world emerging from the depths and darkness. The tonality here (like much of the structural decisions in the work) is based on the natural fibonacci series from which an expressive string threnody grows before the music winds back, as if through a mirror, dissolving in stillness and reflection. The final event is a bar of silence – the conception and metaphorical point of the entire work.

"MacMillan's masterful orchestral imagination is Mahlerian in its huge but translucent tuttis and in its chamber-music-like intimacy. But the voice is his own, and the sounds are wonderfully beguiling."
Sunday Times 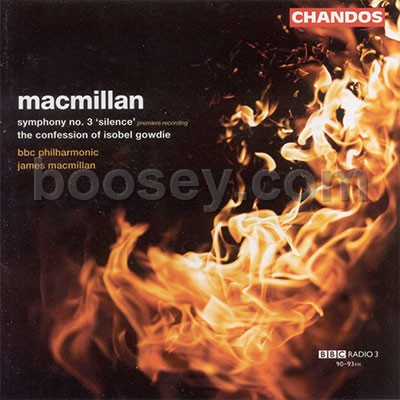 
News stories for this title:
MacMillan interview on Symphony No.3: 'Silence'