My earlier three symphonies employed programmatic elements, whether exploring poetic imagery or literary references, but this new work is essentially abstract. I’m interested here in the interplay of different types of material, following upon a fascination with music as ritual that has stretched from Monteverdi in the early 17th century through to Boulez and Birtwistle in the present day. There are four distinct archetypes in the symphony, which can be viewed as rituals of movement, exhortation, petition and joy. These four ideas are juxtaposed in quick succession from the outset, over the first five minutes or so. As the work progresses these can be individually developed in an organic way, or can co-mingle, or they can be opposed and argumentative.

Over a slow-moving tread, an angular, modal melody is heard on muted trumpet and oboe, accompanied by a sonorous chorale on cor anglais and horns. The first of many imperceptible accelerations brings forward clarinets and solo violas in an urgent and insistent theme revolving around just a few adjacent notes. Above this the pleading strings splay out downwards, becoming more animated, leading to the first quick and joyful music on wind, xylophone and piano, interrupted by rushing strings. In broad terms, from here the symphony has a trajectory from slow to fast: the pace may step back for some more reflective episodes, but there is a general cranking-up of tempo and energy driving through the single movement. The work as a whole is also a homage to Robert Carver, the most important Scottish composer of the High Renaissance, whose intricate multi-part choral music I’ve loved since performing it as a student. There are allusions to his 10-voice Mass Dum sacrum mysterium embedded in my work and at a number of points it emerges from across the centuries in a more discernible form. The vocal lines are muted and muffled, literally in the distance, as they are played delicately by the back desks of the violas, cellos and double basses.

As the music gets faster we hear some of the main themes recurring in different contexts, becoming more fanfare-like and animated. Ideas are stretched and developed but continually thrown forwards. A kind of interplay develops between the ‘ancient’ music and the speeding up process, even when the symphony seems to ‘begin again’, this time in a related mode. The cello section gradually emerges as a principal protagonist, pulling the music to a serene and ethereal core, featuring resonating temple bowls.

The earlier splaying strings are heard again, almost in a mirror image before the music takes a few dramatic twists leading to its final acceleration.

"In one continually evolving movement, the symphony teems with striking ideas, both musical and philosophical…"
The Times

"It is, as ever with MacMillan, a spiritual journey, in this instance governed by "ritual" in its various guises – "rituals of movement, exhortation, petition and joy". The musical ingredients are unmistakably his: plaintive melodies sculpted from the world of Gregorian chant, set against chattering counterpoints, densely aromatic string clusters, resplendent chorales..."
The Scotsman

"…it was a powerful sense of the fragility of memory, and of time passing, which emerged most clearly. Melodies – including some soulful passages on the violas which conjured up Carver’s ancient masses – materialised from the orchestral margins only to fade again like half-forgotten tunes."
Daily Telegraph 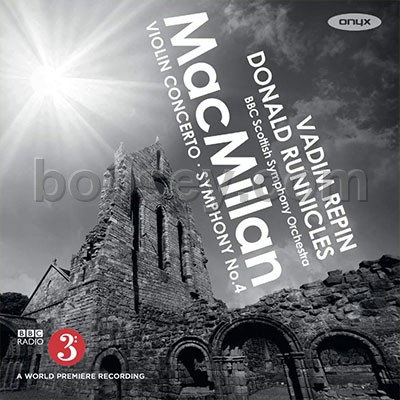 
News stories for this title:
James MacMillan: Symphony No.4 premiere at BBC Proms