One might be inclined to limit the Weavers, both as a drama as well as a film, to the aspect of a historical coming to terms with a pre-revolutionary resistance at the time of the nascent industrialization in the Silesian provinces. However, if one considers the pure content, one discovers in this work neither more nor less than a constant (if even only regional) of a parasitic differential between capital and labor, which again today threatens to become a decisive factor in social discourse on an augmented scale. If one recalls, for example, the speech Jean Ziegler was prohibited from presenting, a speech that was supposed to be given on the occasion of the opening of the 2011 Salzburg Festival, such stuff comes much closer again, becomes demusealized, so to speak, through the course of time. In this speech ("Uprising of the Conscience"), Ziegler wrote "There is no objective insufficiency, that is to say, no great misfortune to account for the daily massacre of hunger that takes place in icy normality ... Because of the collapse of the financial markets, the hedge funds and other major speculators have switched over to the agricultural commodity exchanges. With forward transactions, futures, etc., they drive the prices of staple foods to astronomical heights." The deregulated financial market unleashes its own momentum of greed of global dimension, which in its logic is still related to that of the rationalized production conditions of the hierarchically organized bourgeoisie in the nineteenth century.

The 1927 film by Friedrich Zelnik was one of the first movies at the transition from expressionism to naturalism, and it took over the misery of the weavers’ uprising, remaining close to the original by means of several artifices of the expressionistic tradition (multiple cross-fades in the dream scene, quick sequences of grimaces, etc.), but largely dispensed with the dramatic outrage of the expressionistic tradition, and let the actors act relatively matter-of-factly, and thus gave the word (there are a disproportionately large number of text fade-ins) more weight.

How can one musically complement and comment upon such a cinematic narrative? Already in my first encounter with the medium film, a joint effort with Edgar Reitz (Ortswechsel), the question of the relationship between the subordination and autonomy of the music in the film was of prime importance. The balancing act between an independent musical form and an associative connection of the sounds with the visual level is time and again the leitmotif that connects the delight in musical "illustration" with the level of reflection of its substructure.

Serving as the basic components of the music of the Weavers are parodistic and genre-typical elements (march, music box, workers’ song, etc.) with which in a distant manner the symphonic stringency of the music is set into scene; at a distance, because it emerges from the modular germ cells of its own basic musical structure, and appears as its mask. As a result, the differences in its nature are an optical (or better acoustic) illusion; they all descend from the same origin. Concrete materials (for example, weaving machines) are the foundation of a level of electronic playback that is employed as an auratic alienation of these basic types. At the same time, the music does not portray types of people, but rather situations that imperceptibly merge into one another.

This aspect of unity interprets the fact that in the plot of the Weavers the boundaries of action, the moral as well as the political, become blurred, and the victims ultimately become involuntary accomplices: The devout Grandfather Hilse, representative of the cultural roots of the inhabitants, is hit and killed at the end by a ricochet shot. Thus the revolution also strikes the object of its concern. The more comprehensive the resistance, the less scope remains open for the regulative of the conscience in spite of all efforts, such as that to avoid plundering. This reveals the special dialectic of resistance, and the development of music attempts to take this into account: a power is unmasked, to then immediately see another power emerge.

At the beginning, the work is conceived as a narrowing spiral of the dramaturgy, as a "turn of the screw"; after it releases the set pieces of musical tradition like satellites, it gradually, increasingly changes its energy direction and creates a continuum in which the process reverses: in the last section, with increasing compression and densification of all structural layers, the previous music devolves as a paradox into a static, "deadlocked" condition. The things remain just as proximal as irreconcilable to one another: there is no winner on this side of the repetition compulsion. One must possibly search in Hilse’s chamber, yet it is now sealed.

"An event because a 'Gesamtkunstwerk' was experienced, whose complexity equaled that of an opera premiere ... Johannes Kalitzke, a prominent avant-garde composer, is far from merely illustrating. It was important to him to comprehend the force of the drama and the optics of the film: the misery of the weavers, the analysis according to which their wages were decimated by the more economical machines, and the revolutionary might that ends in a tragic helplessness. Kalitzke begins with tonal stringency in order to transport the distress of the weavers when they are humiliated by factory owner Dreissiger’s (Paul Wegener) paymaster. Yet the sonic tableau, which approaches the borders of the tolerable, is not intensified with the escalation of the uprising. Rather, the music 'sinks' into more pallid, iridescent areas; it appears to observe the violence only with paralyzed resignation as a silent nightmare ... Then: cries of "bravo," stamping of feet. One does not often experience such reactions after a premiere." (Manfred Engelhardt, Augsburger Allgemeine, 26 June 2012) 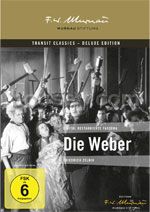