Vier Toteninseln (Four Isles of the Dead) explores the idea of adding musical layers to Johannes Brahms’s Four Serious Songs. These songs, belonging to his later period, give comfort in the face of the ever increasing knowledge that life is transitory. They resemble a safe haven, guarded by bible texts, from which one can look out into a dark space, the space of worldly life.

Due to the process of secularization in modern history that has stretched over several centuries, the ideas about the afterlife have become increasingly indistinct; as a consequence, the phenomenon of death is often totally repressed in our age. The façade of distraction which on the surface seems to embrace life, obstructs the view to any kind of space beyond our own experience of time.

Böcklin’s ‘Isle of the Dead’ provides a suitable parable for this. That which is covered by the shores of the island, behind a blanket of silence and darkness, has become a question of imagination or fantasy rather than of belief. The object itself is invisible.

It is this idea that the music of Vier Toteninseln explores. The method of overwriting and concealing appears to be an aspect of the principle of variation. The image of wrapping is used for compositional patterns which are based on certain analytical approaches to the original. In a way, fragments of the original arise in paraphrased shape between the folds of the wrapping, in the same way in which memory modifies the shapes of invisible things.

The four movements represent four points of view from which the songs can be regarded. In the first and fourth movements, a spectral analysis of Brahms’s first and fourth songs provides the starting-point for an independent development of the structure or sound. In the second and third movements, repetitive patterns and syncopated, irregular types of rhythm are isolated from the original and then imposed back on it. In this they are a tribute to Brahms’s way of generating form out of the spirit of the structure.

‘Kalitzke takes Brahms’s Four Serious Songs as a base over which diverse layers are painted. At once a peculiar ambivalence of power and reverie is created… In a vivid and conclusive way, Kalitzke demonstrates how demanding compositional technique and engaging sonic effects complement each other.’ (Ulrich Pollmann, Der Tagesspiegel, 20 March 2004) 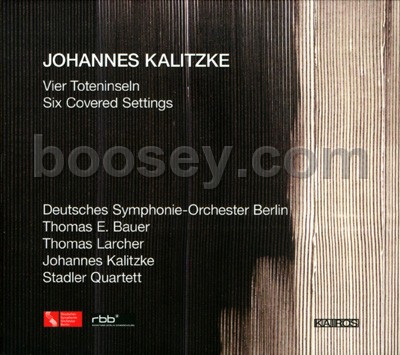