The Chamber Symphony, written between September and December of 1992, was commissioned by the Gerbode Foundation of San Francisco for the San Francisco Contemporary Chamber Players, who gave the American premiere on April 12. The world premiere performances was given in The Hague, Holland by the Schoenberg Ensemble in January of 1993.

Written for 15 instruments and lasting 22 minutes, the Chamber Symphony bears a suspicious resemblance to its eponymous predecessor, the Opus 9 of Arnold Schoenberg. The choice of instruments is roughly the same as Schoenberg's, although mine includes parts for synthesizer, percussion (a trap set), trumpet and trombone. However, whereas the Schoenberg symphony is in one uninterrupted structure, mine is broken into three discrete movements, "Mongrel Airs"; "Aria with Walking Bass" and "Roadrunner." The titles give a hint of the general ambience of the music.

I originally set out to write a children's piece, and my intentions were to sample the voices of children and work them into a fabric of acoustic and electronic instrumets. But before I began that project I had another one of those strange interludes that often lead to a new piece. This one involved a brief moment of what Melville called "the shock of recognition": I was sitting in my studio, studying the score to Schoenberg's Chamber Symphony, and as I was doing so I became aware that my seven year old son Sam was in the adjacent room watching cartoons (good cartoons, old ones from the '50's). The hyperactive, insistantly aggressive and acrobatic scores for the cartoons mixed in my head with the Schoenberg music, itself hyperactive, acrobatic and not a little aggressive, and I realized suddenly how much these two traditions had in common.

For a long time my music has been conceived for large forces and has involved broad brushstrokes on big canvasses. These works have been either symphonic or operatic, and even the ones for smaller forces like Phrygian Gates, Shaker Loops or Grand Pianola Music have essentially been studies in the acoustical power of massed sonorities. Chamber Music, with its inherently polyphonic and democratic sharing of roles, was always difficult for me to compose. But the Schoenberg symphony provided a key to unlock that door, and it did so by suggesting a format in which the weight and mass of a symphonic work could be married to the transparency and mobility of a chamber work. The tradition of American cartoon music--and I freely acknowledge that I am only one of a host of people scrambling to jump on that particular bandwagon--also suggested a further model for a music that was at once flamboyantly virtuosic and polyphonic. There were several other models from earlier in the century, most of which I come to know as a performer, which also served as suggestive: Milhaud's La Creation du Monde, Stravinsky's Octet and L'Histoire du Soldat, and Hindemith's marvelous Kleine Kammermusik, a little known masterpiece for woodwind quintet that predates Ren and Stimpy by nearly sixty years.

Despite all the good humor, my Chamber Symphony turned out to be shockingly difficult to play. Unlike Phrygian Gates or Pianola, with their fundamentally diatonic palettes, this new piece, in what I suppose could be termed my post-Klinghoffer language, is linear and chromatic. Instruments are asked to negotiate unreasonably difficult passages and alarmingly fast tempi, often to inexorable click of the trap set. But therein, I suppose, lies the perverse charm of the piece. ("Discipliner et Punire" was the original title of the first movement, before I decided on "Mongrel Airs" to honor a British critic who complained that my music lacked breeding.) 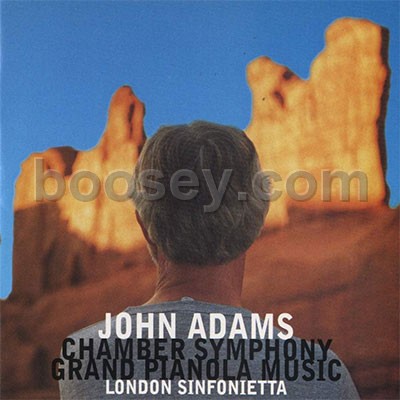